Since the start of the season the UEFA Cup Final has been at the back of our minds, moving closer to the front as each league game passed. The season has been difficult at times, starting with very poor grass cover in the north half following concerts last summer, recovering very well going towards Winter then going backwards following the PFA Centenary Game in December which was played in monsoon like conditions.

Thankfully the club invested in a set of lights from SGL in September, though these were not in full operation until mid-December due to difficulties installing the power. They were only used in fits and starts prior to that. The lights prevented the pitch getting any worse after the PFA game and meant we could retain an amount of grass cover and build on that in the spring. As we moved into March we took advantage of some warm weather and borrowed a seeder from Campeys and drilled in 6 bags of seed, this was repeated again in mid April via a pedestrian spreader oversowing into aeration holes.

After talking to Ed Carter from Scotts, it was decided to apply a base feed at the end of March, 160 kgs of 15-0-29 was applied to compliment two liquid feeds that followed. Our last home game was played against Fulham on 26th April, after that we had two English Schools FA finals to be played on 28th April, typically these were played in heavy rain! The pitch looked a little worse for wear when the football had finished so we decided to use two light rigs on the south half for a week.

Once the lights had done their job, the second liquid feed in our program was applied on 6th May, and as with the initial one on 17th April it consisted of 50 litres of 12-4-6 and 25 litres of Greenmaster Blade. The back up of the slow release and the boost of the liquids really pushed the pitch on during what was excellent weather-hot and sunny, with no rain to be seen for once. I personally have never seen the pitch finish a season with such a high percentage of grass cover, and after looking at the pitch with Roy following a slight outbreak of Leafspot, we both decided that due to the speed in which the grass was growing and how thick the sward had become it wasn't worth treating the pitch with a fungicide allowing it to grow out instead.

Preparations for the final really intensified 10 days prior to the game when UEFA 'moved in' to the stadium bringing a multitude of staff to cover all sorts from stadium branding to administration. With UEFA officials starting in earnest so did our preparations. We finished our last league game with the height of cut at 19mm, since then Poa had started popping up in little pockets here and there so we reduced the cut to 15mm in readiness for the final-the first cut at this height took off 22 boxes, the pitch was cut almost every day following on from this, typically taking off between 6-8 boxes per cut.

The pitch was solid tined widthways with our Toro 880 Multicore on the Thursday before the final, 16 mm tines were used at 75mm spacings and 75 mm depth so as not to disrupt the surface too much. Despite watering during the hot weather the pitch had become a little too firm for our liking, so by opening it up it allowed us to throw as much water on as we could.

The following day Rigby Taylors Magnet Rapide was applied, to further enhance what was already a very healthy colour. By doing these on separate days, it meant we left the cutting for a couple of days, so once it was cut again a further 22 boxes came off. We had previously toyed with the idea of spraying Primo Maxx, but decided against it as we didn't want to stress the Poa out to the point it would stand out on the TV. 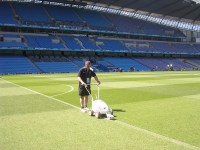 Other cosmetic jobs such as edging off the perimeter, re-measuring the pitch (you never know when a referee will bring a tape measure!), painting the support posts for the nets and moving the technical boxes in a metre were also carried out. Fortunately when Recomac installed the artificial grass in the technical box last year we declined their offer to put permanent white lines in, preferring to do it ourselves in case they ever needed adjusting. Fortunately for us, it so happened, as UEFA wanted them both moving in to accommodate a TV camera inbetween them both, so the existing lines had to be brushed off.

With the weather still extremely hot-the SGL tripod picking up measurements of 27 degrees on a couple of occasions-we decided to solid tine again, the same as last time but lengthways in this case. The same day the fun and games began! We had rehearsals for the opening ceremony from 3.30 to 4pm in the afternoon-amazing considering the ceremony was to only last 4 minutes!

The referee and his assistants declined to train at the stadium, so next up was Zenit St Petersburg for their allocated hour, and despite telling them they very kindly set up four boxes right in front of the tunnel to train in, though in fairness it didn't make a mess which was encouraging. The manager Dick Advocaat was a little frustrated once he was told that we had to stop watering prior to the game 3 hours before kick off so he raised the point with UEFA that he would prefer it to be watered later if possible.

Rangers also trained for an hour and their manager Walter Smith was equally concerned and he too raised it with UEFA. Again, their training session lasted an hour with little damage caused. At this point we would have liked to have got on the pitch but there was a final dress rehearsal of the opening ceremony from 8.45 to 9.30 pm under floodlights. Once this had finished, Roy and the lads from Carrington-Steve, Darren, Gareth and the two Paul's divotted the pitch whilst myself and Gary rolled the pitch, with everything wrapped up for 11pm.

The day of the final began at 6am cutting the pitch twice, during this I had to see the referee and venue director from UEFA during the pre match pitch visit to discuss with the host broadcaster (ITV) regarding watering times, which resulted in an extension being given allowing us to water up to 6pm.

Once the pitch was cut we marked out using the Kombi, stringing out every line as per usual.

About an hour after finishing the marking, one final aspect of the ceremony was rehearsed again and we then watered non stop for 2 and a half hours. One of the reasons we had to stop at 6 o'clock was because about 15 tv companies were using the pitch side as their tv studios!

Both teams were allowed half an hour only to warm up, so that the opening ceremony could take place on time, which only gave us a few minutes to do what little divotting was required.

By kick off the stadium was almost full of Glasgow Rangers fans, barring the 7,000 or so that had come over from Russia. In what was a largely 'run of the mill' game Zenit ran out 2-0 winners, prompting a nice covering of confetti when the winners were having their picture taken on the pitch-lovely! 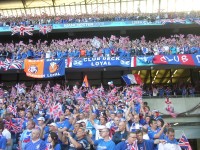 From our point of view the pitch played and looked excellent . We had a lot of compliments during the game from colleagues and also from groundsmen at other clubs, which made our efforts all the more worthwhile. It all seemed a million miles away from that dreary day in December but the work that had gone into improving the pitch since then was well worth it. 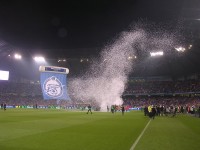 Moving forward, the four days after the final were packed with typical end of season games before the pitch was covered for 17 days for both the Ricky Hatton fight and the Foo Fighters concert. We laso host another concert towards the end of June from Bon Jovi.

Working at this stadium has brought some high profile events-Englands men and womens teams have both played here, we have hosted Great Britain v Australia international rugby league, City have had UEFA Cup games here, two FA Youth Cup finals and to date 11 concerts with 2 more to come and boxing as well. The UEFA Cup Final was though, without doubt, the biggest game here so far and was a great way to finish off our fifth season here at the City of Manchester Stadium.