Keith Dalton is Match Centre Manager with UEFA's Competitions division. One of his responsibilities is that of Venue Director which sees him assigned to a Champions League club to oversee their home matches in the competition

My principle role at UEFA is that of Match Centre manager with UEFA's Competitions division. I am responsible for a small team dealing with competition adminstration and match operations. This includes match fixtures, player registration, match data, playing kit and the monitoring of match preparations. My secondary role is that of Venue Director and each season I am assigned to a club of the UEFA Champions League in order to work with them in preparing and implementing their home matches in the competition. 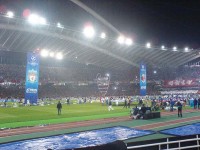 UEFA organises over 1,600 matches per year on grass pitches across competitions ranging from the amateur Regions Cup to the European Football Championship and the prestigious UEFA Champions League.
At every level there is an enormous amount of planning and preparation involved but, whatever the competition, the culmination of these efforts is always the same; two teams striving for success, supported by their fans in the stadium and at home via the television.


Through close collaboration with the football associations and clubs, UEFA tries to ensure the ideal conditions for the players so that they may perform to the best of their ability, giving their team every chance of success and to produce a show to delight the fans.
To be approved for use in a UEFA competition, a stadium must meet certain criteria. For example, to be used for European youth competitions, a grandstand with 200 seats should be available and, at the highest level, 30,000 seats is the minimum. UEFA's Stadia and Security unit coordinate a pool of fifteen inspectors who conduct a total of around 130 stadia assessments per year as well as a further forty to monitor ongoing construction work.
At every UEFA match, there is always a four person team of match officials, a UEFA delegate, who is the official representative of UEFA, and a referee observer who assists the referee team and comments on their performance.


At 9.30am on the day of every match, the match officials and UEFA delegate make an inspection to assess the state of the pitch, goals, lines and, if the match is being televised, camera postions to ensure they do not pose a risk to players. Usually, everything is in order. But it has happened that the goals have been of different heights! This is followed by a security meeting at 10.00am during which the officials and teams review preparations for the match.
One of the most common problems is, of course, the weather. A flooded pitch can be unusable but, depending on its drainage capacity, the situation may change within a matter of hours. Final decisions on match postponement are delayed as long as possible. It is clearly not possible to play on a frozen or snow-covered pitch but, with more and more venues installing heating or covering systems, postponements are rare. However, the climate this season has, once again, proved unreliable with snow causing unexpected problems in Greece where such installations are not available.
During my six years working for UEFA, I have had the opportunity to visit all manner of stadia and, whether a local village venue with standing room only and a snack bar, or an international all-seater capable of hosting 70,000 fans, one thing they nearly always have in common is a high quality pitch and the pride and care of the Groundsman in his work.


The UEFA Champions League is the ultimate stage for the world's most talented players. The success of the competition is built upon meticulous planning, organisation and excellence in every area. Each match must run with the precision of a Swiss watch so that broadcasters, sponsors and, most importantly, the fans and players can be guaranteed optimum conditions. On a match night few things are more important to a player than the quality of the pitch.
For each of the 125 matches of the UEFA Champions League, as well as the aforementioned officials, a 'venue team' composed of four people arrives two days before the match in order to work in partnership with the home club in preparing the event. Event is the correct word since there are so many aspects surrounding the match, including worldwide broadcasting, media activities, sponsorship, ticketing, hospitality and logistics. 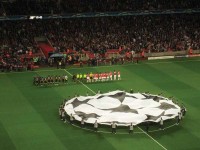 stadium is known as the Venue Director. For everything to run smoothly, good communication and strong relationships with all those involved is essential.
There is one key person in particular who has the power to influence the all important pitch for the smooth preparation of the players, and that is the Groundsman. The value of this role cannot be underestimated and I am always impressed by his dedication and skill along with that of his staff. I am also amazed each time I see a pitch that is played on twice a week still looking like it was freshly laid that morning.


A good understanding with the Groundsman can make things so much easier. For instance, a precise watering schedule is crucial to the planning of television activities, ceremony rehearsals and inspections. From personal experience, I know it is far better to be in his good books than not, or you risk a sudden shower at just the wrong moment!


Of course, not everything always goes according to plan. A delicate pitch and heavy rain the night before a game can threaten the training session of the visiting team. Because of the need for visiting teams to familiarise themselves with the stadium and pitch, this session is only moved to another ground if it will really have consequences for the game the following day. From the point of view of the home club and Groundsman the pitch, of course, needs to last beyond match day and a conflict of interests occasionally arises. Most of the time a compromise is found and teams agree to train only in certain areas of the pitch or for less time. This is often facilitated by the Groundsman himself who will establish a contact with the visitors.
To conclude, the success of the UEFA Champions League, and other European competitions, is the result of a partnership between many people and organisations all working to support football.


On behalf of UEFA, I would like to thank all those who dedicate their time and efforts to providing the high standard of pitches that we see across Europe today.