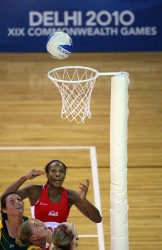 The biggest cultural and sporting event ever held in India is taking place from 3rd - 14th October 2010 as the Commonwealth Games comes to Delhi. Organising an event for the top sportsman of seventy one nations to compete is no mean feat and when it comes to the equipment, only the best is good enough.

UK manufacturing company Harrod UK were delighted to be of service to the Organising Committee for the Commonwealth Games by supplying Rugby and Netball equipment. One set of 17m high Rugby Posts (as used at Twickenham, Wembley and the Millennium Stadium) were flown to Delhi along with eight additional sets of Rugby Posts and eight sets of International Netball Posts. Due to the size of the rugby posts a special freight aeroplane had to be used to transport the equipment.

"Harrod UK have a history of association with the Commonwealth Games" explains Sales & Marketing Director Les Saunders. "We were the official supplier of sports equipment to the Manchester Games in 2002, so we were delighted to be contacted again in 2010. The England teams have a good track record in both Netball and Rugby taking Bronze and Silver respectively at the 2006 Melbourne Games, and I look forward to seeing if we can better the results in Delhi."