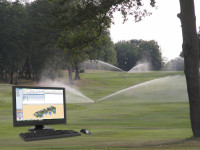 The Drift has become the very first golf club in the UK to upgrade to Toro's brand new Lynx irrigation control system software.

The 18-hole woodland course in Surrey was installed with a full fairways, greens, tees and approaches Toro Golf Decoder Controller (GDC) system last summer. However, the software controlling the irrigation hardware has since been upgraded from Toro's SitePro system to a state-of-the-art Lynx system for improved efficiency and usability.

The Drift made the investment in Lynx and GDC despite these challenging economic times for golf clubs, with the directors' commitment to improving course conditions representing their single biggest financial decision since acquiring the club in 2001.

Having joined the club just in time to see the GDC system installed, general manager Ben Beagley is looking forward to seeing the further benefits brought by Lynx when the warmer weather arrives. "It's very exciting to be managing a club benefiting from this level of investment," he reveals. "It's quite remarkable in this current economic climate and shows a great level of commitment to the members. We are eager to see the up-and-coming course improvements as a result of the new Lynx system."

And with drought forecast for the south of the UK this summer, the new Toro irrigation system would certainly prove its worth. The club's previous system, which was 30 years old, struggled to cope in the exceptionally dry summer of 2010, prompting the directors' decision to replace it. Based on the improvements GDC has already brought about, Ben is excited about the additional enhancements the newly upgraded Lynx system will bring.

"There was a great 'buzz' amongst members when we held the opening ceremony for the system last summer," he continues. "There were noticeable differences on the course within just a few months of its completion. We were particularly keen to enhance areas such as greens surrounds, which we've never been able to irrigate before. Within a matter of weeks the improvement to these areas was immense and we've also had over 100 new members join since making the investment in GDC. And with the Lynx system in place for this summer, the more user-friendly nature of the operating system and increased efficiency will only improve the presentation of the whole course further."

Robert Jackson, distributor Lely UK's Toro irrigation national sales manager, says he's thrilled to see The Drift become the first customer in the UK to upgrade to Lynx. As he comments: "Lynx software is faster, more intuitive and gives greenkeepers all the information they need to better manage their water and resources. When coupled with Toro's popular and proven GDC hardware, Lynx makes irrigation and water usage more efficient than it's ever been, plus it saves time, labour and electricity usage, too.

"With the possibility of severe drought and water restrictions on the way, The Drift will now be efficiently and accurately applying water and making every last drop count. Overall, I'm confident The Drift will reap the rewards of the club's significant investment in the very latest Toro irrigation technology and achieve superior playing surfaces for its members. I look forward to hearing the club's verdict on the Lynx system's full benefits later this summer."