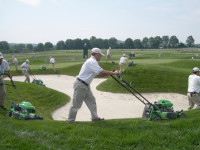 Being picked up from their hotel at 3.30am to start work on the golf course and working until around 9.30pm was an absolute delight for Chris
Sealey and Mike Gash. The reason? They were at Oakmont Golf Club near Pittsburgh, working as UK volunteers during the US Open.

Helping to maintain the course to the highest possible standards, Chris explains: "The team meeting took place very early in the morning and included more than 150 volunteers, together with 55 of the club's staff." Broken down into various working teams, Chris's first role was cutting greens on nine holes and he then went on to bunker raking - the course features 210 of them. Mike had the same responsibilities on the other nine holes of the course.

"We then divoted the fairways and tees, which they were obsessed about," he says. "I was delighted to be on the front-line bunker team, as it meant I
raked the famous Church Pew bunkers." *Memorable standards *Needless to say, for the US Open intense management is the order of the day. Greens were double or triple cut in the morning and then rolled with ride-on rollers and this practice was repeated each evening. 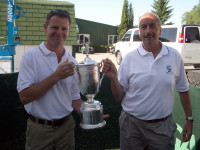 With greens 100 per cent pure Oakmont poa, their own variety, Chris says: "These were not watered but syringed a couple of times a day, just to keep the grass plants alive.

"Fairways were cut with greens mowers and the six-inch long rough was constantly being watered and fed." Memorable moments included having a police escort when 150 on mowers set off down the main road, to access the other side of the course during play.

Different coloured sponsored shirts were supplied to all volunteers for Thursday, Friday, Saturday - and then on Sunday it was Tiger Red - matched by a red hot temperature of 95degF.

The idea of volunteering for the event was spawned in 2005 when Chris and Mike went to Orlando on the BIGGA trip, sponsored by grinding specialist Bernhard and Company. Summing up Chris says: "Out there it is a different world with the machinery they have, the chemicals they use.

"Presentation of the golf course was staggering, the only word you can use for it."