The UK's first Muslim female referee says she is aiming to officiate at the highest level, and she has encouraged other women to follow her path. 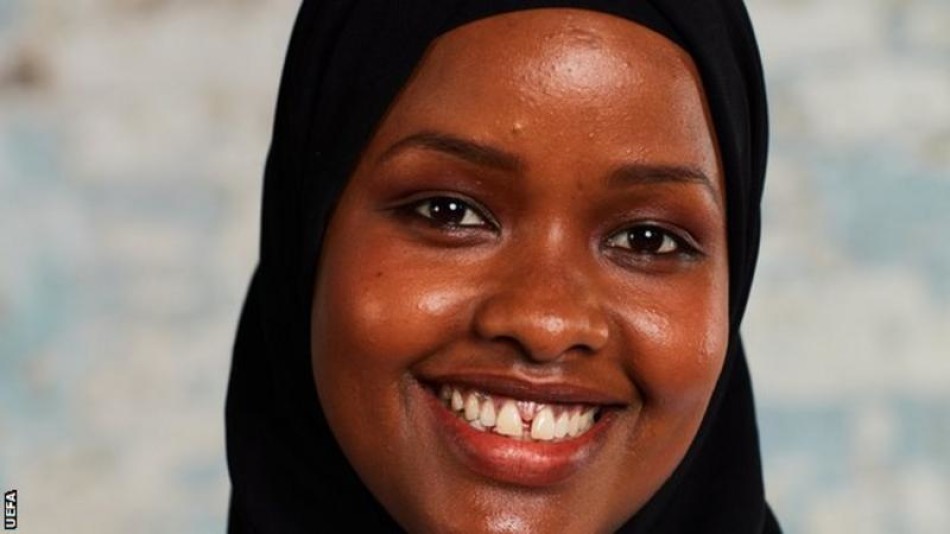 Jawahir Roble was just 10 when she took refuge in London with her family after fleeing civil war in Somalia. Living in the shadow of Wembley Stadium and playing football in primary school were the first steps on her journey to becoming a referee.

In an interview with BBC Sport, the 25-year-old discusses learning English, how she handles discrimination and her career goals.

Roble, also known as 'JJ', arrived on British soil not speaking any English.

She recalls her primary school classmates being "confused" as she struggled to communicate, but she was able to settle in quickly because of her shared love of a different language.

"I didn't speak English but football was there from day one," she said. "I would bring my own ball and whoever has the ball at primary school is at the top. All the boys and girls would play with me and it was the best feeling."

"In the classroom, it was all grammar and I was so confused but the only time I was actually trying to speak was when I was playing with the kids. I would say 'please pass me the ball', 'thank you' and 'shoot'."

Roble says she dreamt of representing England as a professional footballer, but her parents encouraged her to pursue a "normal" career.

"I wanted to play for England but my parents were like it was never going to happen," she said. "They wanted me to study and get a normal job like girls do. The transition from wanting to become a player to a referee happened just because I wanted to try something new and volunteered for the local girls league. Trying new things is the best thing you can do."

Having taken charge of both women's and men's amateur matches while wearing a hijab, Roble says what she used to find shocking has now become an amusement.

She said: "When I first go to the ground I do not wear my kit, and so I go to the groundsman and say 'hello sir, I'm the referee today, please can you give me a changing room?' Then it's usually: 'Are you?'

"At the beginning, I was wondering why they would be surprised, but now I can't wait to say it and you get used to it. I like the shock."

Her steely resilience also extends to the players.

"If I ever receive abuse I would stand up," she added. "During a game, some players might say things like 'this is a man's game'. I say it's a man's game and a woman's game. You just missed the goal and you are having a mare so focus on yourself. After the game finishes they usually apologise."

Despite saying her unique position as the only Muslim female referee is a "title that does not change anything about me", Roble recognises her importance in inspiring the next cohort of women referees.

Roble, who is the subject of a UEFA 'We Play Strong' mini documentary, says the development of female officials has to be encouraged.

"In terms of increasing the level of female referees, I would say celebrate each one and support them," she said. "The women's game is growing and referees have to progress alongside it. Encourage, encourage, encourage."