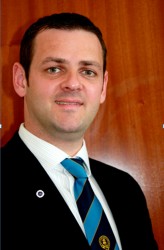 The UK Golf Course Owners Association (UKGCOA), the country's leading authority on the business of golf facility operation, has announced the appointment of James Cameron to the newly created role of full-time General Manager.

Due to start in the new full-time position on February 18, James has been the General Manager of Duff House Royal Golf Club in Scotland for the past three years, prior to which he has a background in senior management positions in sports marketing and media in both his native Scotland and the USA.

Commenting on his appointment, James Cameron said: "It is testament to the work of the UKGCOA that it has shown growth during a challenging time for the golf industry. I am excited to be taking the helm and look forward to meeting and working alongside members and corporate partners."

Jerry Kilby, UKGCOA Executive Director, said: "The UKGCOA's rapid growth has led to the necessity for full-time management and James has the experience and expertise to bring considerable value to the organisation."

Having been involved with the UKGCOA since its establishment in October 2010, Jerry, who has fulfilled the part-time role in conjunction with his commitments as Chief Executive Officer of the Club Managers Association of Europe (CMAE), has decided to step down as UKGCOA Executive Director, allowing him to concentrate solely on his CMAE responsibilities.

Jerry added: "I have been privileged to be involved with the set-up and launch of the UKGCOA and I'm proud of what the organisation has achieved in that time and how quickly it has grown.

"I'd like to thank all UKGCOA members, the board and UKGCOA sponsors for the support I have received in this role and offer my best wishes to the new management team of James and Andy in their new positions."

North Weald Golf Club owner and UKGCOA board member Andy Lloyd-Skinner has been appointed as the new Vice-Chairman of the UKGCOA and will offer part-time support to the new General Manager.

James will also have the support of Association Manager Debbie Goddard and Membership Administrator Paul Taylor and their colleagues from the Federation of Sports and Play Association at their offices at Stoneleigh Park, Warwickshire.

Colin Mayes, Chief Executive Officer of Burhill Group Limited (BGL), and the UKGCOA's Chairman, said: "On behalf of all the members I'd like to extend a warm welcome to both James and Andy. We look forward to what we hope will be a long and successful future with the UKGCOA.

"I'd also like to thank Jerry for all his hard work getting the organisation to the position that it currently occupies in this country's golf industry."