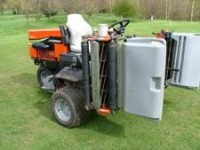 Head Greenkeeper Simon Willey was in the market for a new greens mower and had demonstrations from the major manufacturers.

Geoff Houghton, First Assistant and Mechanic added, "I'd seen the press reports and then saw a demonstration at BTME. From my standpoint it's going to be a real timesaver when we come to change blades later in the season and I'll certainly keep an old set for use after top dressing. The ease of changing the bottom blade will encourage better turf maintenance practice and inevitably produce better putting surfaces."

Spalding Golf Club, located on the outskirts of the town, is an 18 hole, 6,478 yard par 71 course in an established parkland setting with numerous water hazards including a drive on the second over the River Glen.

John Maskell is the Head Greenkeeper and he has just taken delivery of a specially adapted Jacobsen T-Plex which has been specially modified to suit the compact tee boxes on the course.

"We chose MagKnife because we are undertaking a programme to rejuvenate our tees and provide a better quality surface. Our T-Plex has the optional 11-knife reels which produces a finer cut with more cuts per metre and has also been fitted with wheels and tyres from a Jacobsen G-Plex III. With 10" rims and 12" ribbed tyres we achieve better traction on the steep sided slopes to some of the tee boxes and can cut very close to the edge of bunkers without disturbing the lip.

"We are also looking at MagKnife reels for our Fairway 405 as they will certainly reduce downtime when we have to change the blades on the seven units. As the reels are interchangeable with the T-Plex this will provide me with flexibility, should we encounter any problems."