0 Ultra-Grooming the ATT way for The Renaissance Club

The Renaissance Golf Club nestles on 300 acres of the famous golfing coastline of the Firth of Forth. Tom Doak was hired to create a world-class course whilst showcasing the natural features of the area. It was opened in April 2008 and was founded on respect for the traditions of the game - the condition of the course is paramount and their motto is to have the 'best course condition in the UK'. 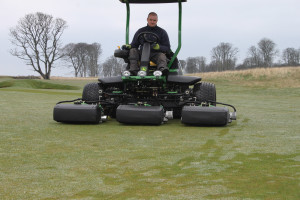 Paul Seago is Head Superintendent (the club is American owned) and has been at the club since January 2006; being in the greenkeeping industry his whole life. Since construction the course condition had improved year on year, however in September 2013 it was noted that the course had become static. Part of the problem was that the machinery they had was designed to be sympathetic to the turf as it was 'growing in' and they needed to change tack and put together a plan of sward refinement work.

Richard Scott of Thomas Sherriff Groundcare was called in, known to the club in part for selling them a Progressive ProFlex mower from The Grass Group. Richard recommended a demo of the ATT TMSystem™, also from The Grass Group, and arranged for ATT's John Coleman to do this personally.

The TMSystem™ is ATT's flagship product and was developed some 10 years ago. It is a product for triplex greens mowers to replace their cutting units with a range of SMART cassettes to enable differing maintenance activities to take place. The system can carry out aeration, brushing, de-thatching, scarifying, top dressing, grooming, levelling and mowing. 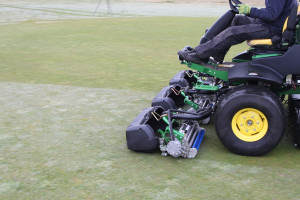 Fitted with the ATT SMARTUltraGroomer™ to the pedestrian INFiNiSystem™ unit, John showed how the cassette could create a superb finish. "The day of the demo was very wet," says Paul, "but John took the INFiNi out and created a great finish with no mess as everything went straight in the box. I take my hat off to him. He has used his experience as a Greenkeeper to come up with a machine that's Greenkeeper friendly and ticks all of the boxes."

Paul was so impressed that he decided there and then that that was what the course needed. After a nod from the clubs mechanic, who pronounced the cassettes 'well engineered', the only decision was how many units they needed. Paul suggested that if they were to do it right, they needed to treat the fairways the same as they were going to treat the greens so both the fairway mower and the two triplex have been catered for with a total of eleven cassette units being purchased for the course.

In essence, using the UltraGroomer cassettes will refine the turf and take the club to the next level. The units are used on a 'little and often' approach; not too deep to achieve density on the fairways by improving the thickness and quality of the sward, with the club expecting to get back to peak condition within 2 years. Paul again, "We have not been disappointed. They have been used continuously throughout the season - it can be pouring down with rain but the lads can still go out and do the work and leave no mess meaning we can keep to schedule."

Greens speed is critical at the club and they are now getting good feedback from the players. They have not had to go below a 5mm cutting height this year but have managed to achieve the greens speed without having to sacrifice the height of cut.