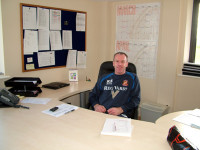 I was very pleased to hear the news about Kevin Ball's appointment as caretaker manager at Sunderland Football Club. I have known Bally for many years, originally working with him whilst I was Head Groundsman at Fratton Park in 1983-84.

Since that time I have kept an eye on his career, he was an established player at Sunderland from 1990 to 1999 and joined the club's coaching team when he stopped playing. This recent step up is a massive opportunity for him albeit, initially, a short term one.

So, during a scheduled visit to see Adrian Partridge, the Head Groundsman at the Stadium of Light, I was hoping for the opportunity to see Kevin again. Very kindly, Adrian was able to make the necessary arrangements, we met briefly at the club's Academy, a very impressive set up with a range of top quality, specialist conditioning equipment and facilities.


Kevin was in his office, and we had an enjoyable reminisce about the old days, however talk soon came around to what he would like to achieve in the last remaining games of the season. His aim was to bring about a change in the attitude of the players, instilling some confidence and team spirit and, above all, increasing their work rate. His hope was to turn the fortunes of the team and bring about a long awaited win, especially at home.

We also talked about pitch quality and what he expects from the playing surfaces. Having been at the club for well over 16 years, Kevin is very much aware and appreciative of the commitment of the groundstaff to provide the best surfaces possible.

However, like many other clubs, the interests of the players often come before pitches. Kevin is well aware of these issues and is one manager who will be keen to support the needs of his groundstaff, especially knowing that quality surfaces increase player skill levels whilst at the same time reducing the incidence of injury.

Six groundstaff are employed to maintain both the stadium pitch and the academy ground facilities. Adrian Partridge is based at the Stadium of Light and works mostly on his own, but he can call on help from the academy staff if and when required. Glen Campbell (not the Rhinestone cowboy) is the Head Groundsman at the Academy where he manages a staff of four - John Gutteridge, John Richmond, Chris Hudson and Mark Sleightholme, each having well over ten years service with the club.

Both the stadium and academy are relatively new facilities. The Stadium of Light was opened in 1997 and the Academy of Light opened its doors in March 2003. 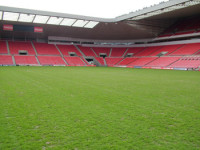 The Stadium of Light is a modern wrap around stadium that seats 49,000 people. Like most new stadiums the presence of air and light has been dramatically reduced. The club recognized the problems of shade several years ago and purchased an SGL lighting rig that helps Adrian maintain grass growth during the winter months.

However, like most new technologies, they can often bring added problems. The heat generated from the lights warms up and dries out the soil, the temperature is often 3 degrees warmer than other areas resulting in five times more grass clippings being collected from the treated area than from the whole of the rest of the pitch. Even in the depths of winter Adrian has to irrigate regularly and apply some nitrogen based fertilizer.

The lighting rigs are very manoeuvrable allowing Adrian the opportunity to move them around the pitch as and when required. They need to be in situ for a number of hours to achieve results and, although weather and fixtures can affect their use, Adrian would not be without them.

Although other areas of the country have been very dry, the north east has had its usual wet winter. The stadium pitch has been multicored on a regular basis during the wetter months to a depth of 100mm, the maximum working depth allowed due to the undersoil heating system.

Adrian usually koros off the surface vegetation and reseeds, but this year he wants to maintain some established grass. His end of season renovations are due to start on 17th May when he will scarify the pitch in several directions and remove all debris, over seed with Barenbrug Bar 7 at a rate of 25-35 m2 and finally topdress with 50 tonnes of compatible sand to restore levels.

To help get the pitch through to the end of the season Adrian has already applied some seed and 15 0 10 NPK fertilizer.

The academy is a superb complex, with state of the art gyms, medical and swimming facilities. The grounds consist of four playing plateaus that offer large training areas for practices and matches.

Glen is in charge of the site. The pitches are used by all the club's teams - seniors, reserves and youth side train during the week, averaging at least three hours play per day, with several matches played at weekends.

There is one reinforced fibre sand pitch, identical to the stadium's, along with ten rootzone constructed pitches, which are built on top of heavy clay. The weather is a key factor, the pitches have been laid out in four separate bowled areas with grass banks surrounding each pitch area. The site is very exposed to north easterly coastal winds so, not surprisingly, tree planting is high on Glen's agenda.

Further drainage improvements are planned and the possible completion of an indoor training facility. As for day-to-day maintenance grid and pitch areas are marked out on a daily basis. Grass height throughout the playing season is kept at 27mm using a combination of triple and pedestrian mowers. The club is currently building a new permanent storage and mess room facility for their machinery and materials.

End of season maintenance will mirror that of the stadium pitch - scarification, over seeding and top dressing of all areas.

Glen, like Adrian, is committed to providing first class facilities for the playing staff of Sunderland Football Club and, like many Sunderland fans, he is hopeful that Kevin Ball will be able to turn the club around and provide the impetus to make the club successful again in the forseeable future.