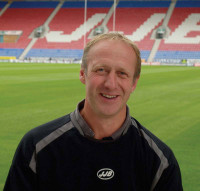 The surface at the JJB Stadium in February 2008 during the Wigan v West Ham match, was described as "more suitable for mud wrestling than playing quality football".
Arsène Wenger described the pitch at Wigan Athletic as "a disaster" after Arsenal drew 0-0 at the JJB Stadium in March 2008.
John Reynolds visits the boys at Wigan to see what remedial measures have been taken to prepare for the 2008-2009 season

Every good groundsman feels particularly hurt by adverse critism and, for JJB Stadium Head Groundsman, Ian Foreshaw (right), last season was a "nightmare scenario." Not a man to let things get him down though, he and his dedicated staff soldiered on counting down the days until the final whistle blew on Friday evening 16th May with a crushing 38-14 victory by Wigan Warriors Rugby Club over Warrington on a pitch that ironically, actually looked very presentable by that time. 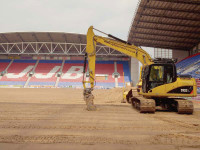 Nevertheless, the following day, contractors Talbot Sports Turf Installation moved in to rip up the offending Desso pitch, with huge sighs of relief from Ian and his team.
The JJB Stadium was officially opened by Sir Alex Ferguson on August 4th 1999. Constructed to accommodate a seated crowd of 25,138 the all modern complex cost £30 million to build. The ground is shared between Wigan Athletic FC and Wigan Warriors Rugby League team.
Four years previously Wigan Athletic FC, which was then playing in the Third Division (fourth tier), had been bought by local millionare Dave Whelan. The new owner immediately stated his ambition to take the club into the Premiership, a comment that was widely ridiculed at the time. Within ten years, however, Wigan were indeed playing Premier League football and Whelan's dreams had been realised. Their meteoric rise culminated in their first ever major cup final against Arsenal on 24th January 2006. Unfortunately for Wigan, they were defeated 2-1 after extra time. 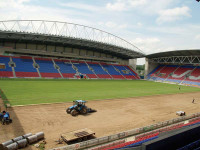 However, early in the 2007-2008 season, Wigan Athletic's luck seemed to be running out after the club slipped into the relegation zone, with a prolonged losing streak resulting in the sacking of Manager Chris Hutchings. In November 2007, ex Birmingham City Manager, Steve Bruce, accepted a £2 million-a-year deal to take over the team management and Wigan were quickly on the up again. Improved team performance and convincing wins during the rest of the season saw Wigan guaranteed a place in the Premier League for the 2008-2009 season. 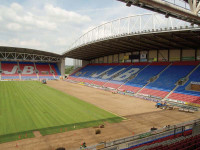 Super League Wigan Warriors Rugby Club are one of oldest and most famous rugby league clubs in Britain and attract a huge following of dedicated fans to the JJB Stadium for every match that, strangely enough, far outnumber the attendance figures for football. Traditionally, the rugby supporters are associated with the eastern area of Wigan and the football fans with the western region which surrounds the old Springfield Park, previous home of Wigan Athletic FC. Tremendous rivalry exists between the two clubs with fans on both sides avidly and deliberately supporting away teams during matches, much to Dave Whelan's annoyance!
Although the football and rugby teams share the stadium equally, their training facilities are completely separate. The rugby lads using the Edge Hall Road ground at nearby Orrell, and Wigan FC the Christopher Park ground, a stone's throw from the stadium. 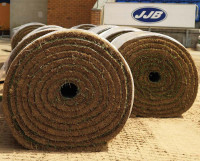 The demands created by playing the two disciplines on one shared pitch have been graphically illustrated by problems encountered at the JJB in recent times. A Desso specification pitch was originally installed when the stadium was built in 1999 and, initially, stood up well to play, although Ian Foreshaw feels that heavy rolling during the first two years created long term compaction problems. "With only a matter of a few weeks allowed for minimal renovation work, we were lucky if we were able to scarify, aerate, lightly sand and overseed before play recommenced each season, and this was nowhere near enough maintenance for a Desso spec pitch. If weather conditions were against us, we were absolutely stuffed" says Ian. 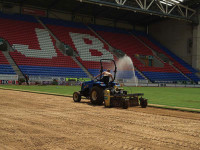 By December 2005, with the club in the Premier League, the pitch was desperately in need of replacement. Pressure of time dictated a speedy solution however, and the fateful decision was made to Koro and turf the pitch over the old Desso surface, with only a shallow sand rootzone, at a reported cost of around £100,000. Heavy usage three weeks later soon exposed the inadequacy of the system and, with nine games played within a three week period, the stability and durability of the pitch was already seriously in question. Unfortunately for Ian and his groundstaff further major corrective work was now impossible with the season well under way.
For the 2006-2007 and the 2007-2008 seasons as much work as possible was done in the couple of weeks gap between football and rugby but, again, what was achieved was the bare minimum required due to the ever present time factor.
By January 2008 the pitch was in real trouble with some of the wettest weather on record and with poor rootzone drainage, the pitch rapidly became water-logged and turned into a damaging quagmire, with pitch levels deteriorating rapidly.
The problem was directly related to the old, heavily compacted Desso pitch, which was now acting as an impenetrable membrane and effectively sealing off the drainage system below. The shallow, sodden rootzone was now sandwiched between the new turf and the old pitch beneath. Unable to cope with the extremely high rainfall, the pitch rapidly reached field capacity and became swamped with each cloud burst. Desperate aeration work around the clock by the groundstaff and the purchase of a protective cover for £110,000 just about saved the day, but critism was mounting in the press and from frustrated and infuriated visiting Premier League teams unused to playing in such conditions. 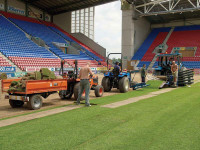 "One particular corner of the pitch was especially bad and we decided to lift the turf and have a look at conditions underneath. We were astounded to find that you could pass your entire arm under the turf and there were just no roots to hold the turf down," says Ian. "The pitch had stood up to over eighty football and rugby games in 2007-2008 and we just couldn't wait until the end of the season to rip the whole thing out." 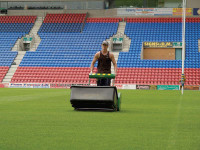 On Saturday 17th May Talbots moved the diggers in and removed the entire turf area and the old Desso sub layer to a depth of 30cm to expose the original drainage sand, before applying the new rootzone and lazer grading
After applying 2,300 tonnes of 80/20 rootzone mixture ameliorated with 160 tonnes of fibre sand, the entire area was levelled and lazer graded prior to turfing. To provide fertility for the new turf, thirty bags of slow release fertiliser and sixteen bags of biostimulant were mixed into the rootzone surface.
A Harley power rake was then used to remove any final wheeling marks and finish the surface, followed by the Talbot's turfing team who then moved in to lay an 80/20 Perennial Ryegrass/Fescue mixture from Lindum Turf. To lay the entire pitch with the new turf took approximately five days with each area being irrigated as soon as it was placed in position; like a huge jigsaw puzzle each roll was interlocked for stability.
Within two weeks of commencing work the new pitch was laid and light mowing commenced shortly afterwards. Two weeks later the groundstaff verti-cut the pitch and applied 80 litres of 17:2:5 liquid feed plus trace elements, followed by ten litres of liquid biostimulant and twenty litres of liquid iron. One week later, and a mere four weeks after the project began, Wigan Warriors played their first game against Harlequins. Ian was very pleased with the way the new pitch performed.

Mowing height is currently maintained at 35mm for rugby and 30mm for football, although the height will be gradually lowered as the turf matures.
The pressure that the grounds staff are under at the JJB Stadium can be gauged by the fact that, when the last rugby league match ends at 10pm on the 22nd August, it will be just seventeen hours before Wigan Athletic play Chelsea in their first Premier League game of the new season.
There are four staff. including Ian, at the Stadium. They also have full responsibility for the Warriors training ground pitch. Ian joined Wigan Athletic in 1998 as a groundsman at the Christopher Park Training Ground and, in 2002, he was promoted to his current position. Ian's partner Nicola also works at the JJB Stadium as Head Receptionist. Ian is looking forward to the challenges of the 2008-2009 football season with confidence. Commenting on the troubles of the past two years, Ian says "I have learnt to take adverse critism on the chin now, however unjustified I feel it may be. You just have to get your head down and push on through until things improve, as they always do eventually. I don't take things personally because I know we all do a superb job. And I have complete faith in Mr Whelan and my staff, who are totally supportive.
My thanks to the staff and management Of Wigan Athletic and Wigan Warriors for their hospitality and kind cooperation.

All photography by courtesy of the above.