Moles are generally solitary animals, spending much of their time on their own, only coming together for mating. They defend their own territories aggressively, although they can share runs under hedges and fences where their territories overlap. This is why, when a mole is caught, another can quickly move into its vacated territory.

They have several layers of tunnels; deeper, semi-permanent ones used for breeding and by successive generations, and shallow short-lived surface ones used for hunting. It is these temporary hunting tunnels that cause most of the trouble as the mole excavates at a rate of about twenty metres a day, pushing up debris in the form of mole hills.

They can move along their tunnels surprisingly quickly - one metre a second - and, because its fur can lie at any angle, it can go backwards as well as forward through the tunnels. They are also good swimmers and, in times of flood, will swim to higher ground.

The adult mole weighs about 80 grammes and is 12-14cm in length, and its tail is 2-4cm long; it holds this semi-erect when it is working to brush the tunnel walls, picking up vibrations passed through the ground by worms and insects.

The mole consumes about its own body weight in food per day, working on a sleeping/working pattern of about four hours and, when there is plenty of food, they will bite the heads off worms and store them for later.

The female has one litter a year, usually of three or four, between February and June. The young are weaned at about one month and are pushed out to fend for themselves and establish their own territories shortly after. They become sexually active at the age of one year and live, on average, between two and five years.

Since Roman times, man and mole have been in conflict and mole catchers have been using traps since then. One of the earliest ones was a clay pot, part filled with water in which an exhausted mole would eventually drown. These were used through the medieval period and right up to the 19th century in some areas. Smaller clay traps, made like drainpipes, were developed in the 1700s but, when mole catching became more of a commercial enterprise, a better and stronger trap made of elm was developed. During the Victorian era, the metal trap was developed.

In the 1800s, the art of trapping began to decline when poisoning became the method of choice as it was easier and required less equipment.

Worms were caught and soaked in strychnine and then inserted into the run. Whilst it was an efficient way of dealing with the moles, it was not considered humane and was banned in 2006. There was then a steady increase in mole activity and the mole catcher with his traps was in demand again, traditional methods being seen as one of the best ways to control moles. 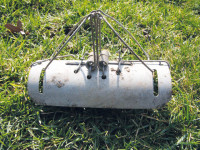 There are several types of traps in common use now. The half barrel trap, or Duffus as it is called, is double ended so is capable of catching two moles in a single setting. Other types include the scissor, the claw and the trapline which are inserted along the inside of the tunnel.

I prefer the claw trap as it is quicker and easier to set. I put it in the run and half fill it with soil. It is then triggered by the natural upwards movement that a mole makes when clearing the soil out of the run.

As well as traps, I carry a dibber with me to poke into the soil to find the run, a narrow spade to cut a trap width out of the turf, and a trowel and a sharp piece of wood for clearing out the hole.

When trapping, I prefer to use too many traps rather than not enough. It is said that moles are solitary, but that is not always the case as territories sometimes overlap and, during the breeding season, the moles are not as territorial as they are looking for partners, and you can sometimes catch two moles if you put two traps at a junction.

There are many myths about ways to catch moles, such as laying sharp things in their run or putting bottles or windmills nearby to cause vibration; there is very little evidence that these work.

If you want to catch them, the best way is to set traps, you can pick up the information in articles or off the internet, but I think the best way to learn about mole catching is to get someone qualified to show you. I was taught on a golf course by a very well known mole catcher who, at the end of his lesson, said "Well lads, off you go and, when you can catch a mole in a trap before you have left the site, you can call yourself a mole catcher". So, I can honestly call myself a mole catcher, as I have on several occasions.

I enjoy going out mole catching. I get to see places and countryside I'd otherwise never have the opportunity to see and meet people from all walks of life; millionaires, owners of country mansions, farmers and everyday country folk.

I do sometimes get strange reactions from folk, not all of them agree with the trapping. One lady kept on going into the farmer's pasture, removing the traps and throwing them into the hedge. Another thought I was planting trees and, when I told her what I was doing, got very upset and lectured me on the error of my ways. But the most bizarre one was when, removing traps, I was approached by a policeman who demanded to know what on earth I was doing digging around in the field? When I said moling, he had no idea what I was talking about and it took quite a time to convince him that it was a genuine activity. I later found out that certain ne're-do-wells in the area had been concealing drugs in nearby fields. I'd like to know how long he had been staked out watching my marked traps.

If you decide mole catching is for you, good luck, but just watch out for angry ladies and suspicious policemen!

A range of high quality British made claw mole traps and tunnel mole traps as recommended by How to Catch a Mole author Armour Roberts are available from the Pitchcare Store.