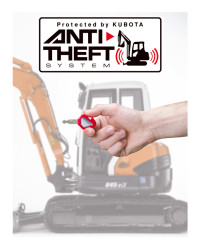 Sales of Kubota mini excavators, the world leaders in this sector, have continued to increase significantly, further boosted by the incorporation of a unique key-based 'ANTI-THEFT' security system as standard equipment.

Kubota pioneered the use of mini excavators in the UK and Ireland and minis now outsell the traditional excavating machine, the backhoe loader.

Commonly found in the fleets of most construction companies and plant hirers, mini excavators are continuing to extend their popularity for a wide variety of applications and end-users, ranging from civil engineering to plant hire, utilities to landscaping and housebuilding to grounds maintenance, due to their compact size, exceptional versatility and 360 degree digging and dumping facility.

Kubota has produced more than 286,000 mini excavators since 1974 and now supplies in excess of 24,000 units annually, with sales still climbing, and was the first company to introduce them into the UK and Ireland in 1979.

As the acknowledged European and world market leader, Kubota provides the largest minis range from a single manufacturer, with 18 base models spanning the weight categories from 0.85 to 8 tonnes, and including the widest selection of highly versatile zero tail swing machines.

To combat the increasing theft of construction plant, in Autumn 2005 Kubota responded to market demands by incorporating a complete 'ANTI-THEFT' security system - the first and still the only one of its kind fitted as standard equipment by a mini excavator manufacturer.

The simple, easy-to-use system is based on an individually programmed key for each machine that replaces the traditional universal starter key. This key has an identification code embedded in an IC chip that incorporates a state-of-the-art immobiliser system.

It starts and stops the engine and also opens the machine's cab door, fuel filler cap and engine canopy. Without it, the fuel, hydraulic and electric systems are fully immobilised and any attempt to start the machine with an un-programmed key activates the system's alarm.

The 'ANTI-THEFT' system has been enthusiastically received by plant hire companies and end-users alike and has already proved its worth by foiling attempts to steal Kubota machines.

Typical of the industry comments being made, Guy Mathew, Commercial Director of Power Plant Hire Ltd, Halesowen, West Midlands, said: "As a responsible plant hirer we take plant theft very seriously and are pleased to be able to offer our customers a sophisticated and factory-backed anti-theft system as standard".

Similarly, Ken Stewart, Group Procurement Manager for the GAP Group, the UK's largest independent tool and plant hirer, who have purchased more than 2,000 Kubota minis over the past few years, said: "The 'ANTI-THEFT' system now being fitted to Kubota machines is great 'added-value' and an effective security device and theft deterrent which is proving extremely popular with our customers".

Building contractors G.E. & A.F. Silvester Ltd of Bishops Stortford, have positive experience of the security benefits that the 'ANTI-THEFT' system can bring.

Having left a new 1.5 tonne KX36-3 canopied machine for the weekend, at a site they were working on, a potential thief spent some considerable time trying to 'hot wire' it.

Eventually, after continually failing to start the engine, he gave up and fled the scene - although leaving some damage to the wiring.

Company Director, Andrew Silvester, commented: "The fact that the thief could not start the engine goes to show the value of the personalised security system. Although the wiring was damaged in the attempt, we didn't have it stolen and after the wiring was repaired it was soon back at work".

Said Richard Harrison, Kubota Sales & Marketing Manager: "Excavators, and particularly minis, remain some of the most desirable targets for thieves and, with plant theft still on the increase, this is why we decided to become the first in our field to include a complete security system as standard equipment".

"The vast majority of other existing construction plant & equipment security devices are retro-fitted and many of these are complicated and have drawbacks or limited effectiveness. Our factory-fitted key system is very simple to use and is designed to provide an exceptionally high degree of security."

He said its introduction was continuing to meet with a very favourable response from customers. "When it was first introduced, several purchasers delayed taking delivery of their new machines so that they could have them supplied with the new 'ANTI-THEFT' system."

Kubota has made great strides in recent years in helping to reduce theft of its equipment. Amongst numerous measures taken, all Kubota machines are security marked with a 17 digit vehicle identification number, and machines and first owners are registered with The Equipment Register (TER).

Customers can also have their machines retro-fitted with satellite tracking systems through the nationwide network of specialist appointed Kubota dealers.

"Immobiliser systems have helped bring about a marked reduction in car thefts since they were first introduced by automotive manufacturers. We are confident the same will happen with our mini excavators now that we have the new 'ANTI-THEFT' key system in place - providing peace of mind for hire companies, plant users and owner operators alike", concluded Richard Harrison.

A Kubota 'ANTI-THEFT' system information pack and a free key ring (whilst stocks last), together with details of the complete Kubota mini excavators range, can be obtained via the 'ANTI-THEFT' response hotline Tel: 01283 227593. Fax: 01283 552528. Email: anti-theft@kubota.co.uk


As the world leader, Kubota provides the largest range of mini excavators, including the widest selection of zero tail swing machines.