Like many clubs in the lower divisions, Carlisle United has been the proving ground for managers and players. Bill Shankly, Bobby Robson and Bob Stokoe number amongst their former managers whilst players of the calibre of Peter Beardsley, Stan Bowles, John Gorman and Rory Delap have all graced the turf at Brunton Park.

Spare a thought for all the football stadium groundsmen who have to work minor miracles trying to keep their pitches in good nick throughout the busy Christmas period and the colder months of January and February.

Not all clubs have the ideal resources to protect their pitches from the elements, especially those in the lower divisions. Whilst the winter weather in recent years has been quite favourable, for clubs situated in the north of the country conditions have still been severe and testing.

One of these clubs is Carlisle United, England's second most northerly league club after Premiership Newcastle United, and discounting Berwick as they play in the Scottish league! 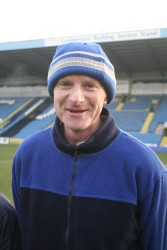 December in Carlisle can get cold, very cold, and it made me realise the conditions our Groundsmen have to face in the north of the country. It was just before the Christmas holidays that I caught up with the ground staff at the club, a friendly bunch who, between them, had served the club in one way or another for many years.

His assistant, Norman Potts (69) has been at the club eight years. Les Nicol (64) works part time on the pitch and has been associated with the club for 20 years in almost every department during his time at the club. The club's latest recruit is apprentice Greg Bacon (16).

David's arrival at Brunton Park coincided with severe flooding of the ground and surrounding areas when the Rivers Eden, Caldew and Petteril burst their banks three years ago, leaving heavy deposits of silt on the pitch once the water had subsided. Although much of this was removed a decision was taken by the club's management to improve the playing characteristics of the pitch. This included installing a new primary drainage system and a new pitch.

The old soil based pitch was originally built on a landfill site which, over the years, resulted in a number of settlement problems including dips and a very large crown.

The club phased the work over two seasons. In the 2005 closed season the new primary drainage was installed at five metre centres and, in May and June 20

06, a new pitch was installed which involved the removal of all soil material down to a depth of 400mm. In its place a 100mm gravel drainage layer was installed, 50mm blinding layer, 150mm of lower rootzone material (sand) and, finally, 100mm of upper rootzone material of sand with 350 tonnes of fibre sand. A fully automatic pop up watering system was also installed fed from a borehole. The pop up system consists of fourteen perimeter sprinkler heads, with a further eight on the pitch; all can be individually controlled.

At the same time the club took the decision to install the pipework for an underground soil heating system. This will be commissioned some time in the future when funds become available, a reminder of how strapped for cash teams in the lower divisions can be!

The pitch was oversown with a British Seed Houses A20 Ryesport seed mixture made up of 30% Aberelf, 30% Cadix, 20% Vesuvius and 20% Sunbright.
Once completed David and his staff had their work cut out to ensure the new pitch was ready for the coming season. The pitch played well in its first full season and the team enjoyed their highest league position for many years after gaining promotion back to League Division 1 the previous season.

Like many football clubs, Carlisle United are always looking to increase their revenue by hosting events other than football. During the 2007 closed season David and his staff had to cater for an Elton John Concert. This dictated the level of work they were able to undertake on the p

itch. After the concert a small amount of black layer was evident in some areas of the pitch, mainly the shaded areas. Ideally, David wanted to koro off this material and keep the surface clean. However, the timing of the concert, on June 3rd, meant that he had to resort to other renovation methods.

He scarified the pitch to remove thatch and any lateral growth, hollow tined, topdressed with 30 tonnes of fresh sand and overseeded with BSH A20. The new seed had germinated by June 15th and David was able to continue with the ongoing maintenance programme.

Importantly for David, one of the club's sponsors is Rickerby, a local horticultural and agricultural machinery supplier, who count amongst their franchises Ransomes Jacobsen, Massey Ferguson and Charterhouse Redexim. They provide the club with specialist equipment as and when needed. For example, David can call on expensive aeration equipment that would be beyond the club's means to buy outright. This allows him to carry out a complete aeration programme without needing to use contractors.

David and his staff also look after several other soil-based pitches adjacent to the main stadium. They use a com

bination of ride on and pedestrian 36-inch cylinder mowers for cutting these pitches. The main stadium pitch is maintained at a height of between 25-28mm depending on the time of the year.

The feeding programme begins around March/April time with a 12:0:9 followed by an 18:3:28 during the renovation period. An 18:0:28 in July, is followed by a dose of 7:0:14 plus Fe in September. It is then a case of maintaining colour through the winter using a 4:0:8. This may be accompanied by some additional foliar feeds as and when required.

The ground is fairly open with plenty of air movement around the pitch, although some of the old stands, particularly the ones on the south side, cause shading problems. Wind chill and shade also influence surface temperatures dramatically with David often seeing a difference of 10OC degrees from one end of the pitch to the other.

During my visit the staff were removing the ground covers to finish off their match preparations, striping up and marking out for the visit of Leyton Orient which, at that time, was their tenth game in five weeks.

Regular maintenance regimes do not differ much from any other sand based football pitch. It is a case of working with the weather and going through the routine pre and post match activities, repairing divots, scars, cleaning up, mowing and marking out in between the feeding, watering and aerating regimes.
Like most Groundsmen David can be very protective of his pitch, especially when he feels it is being abused, which is often the case with teams visiting Brunton Park.

The FA have a set of rules and regulations regarding pre-match warm ups, and David goes out of his way to provide the necessary portable goals and areas for this purpose. "I get very annoyed when players and coaching staff ignore my wishes and go off and do their own thing without thought for the unnecessary damage they cause to the playing surface, especially during the winter months when grass recovery is poor. I am keen to see more support for groundsmen in this important area!"

David says it is all about a lack of respect for the work they do and what they represent. "Some players and coaching staff do understand our issues and what is involved in preparing a natural grass pitch. They respect our wishes and go out of their way to work with us, however, there are still many who remain totally ignorant of what we are trying to achieve and, indeed, have little or no respect for groundstaff at all."

"It seems to me that this lack of respect is more prevalent in football than other sports. From my own experiences Groundstaff and Greenkeepers tend to be better respected by the end user at cricket, rugby and golf clubs."

"The whole team, staff, players and officials are all conscious of the effort we put in here at Carlisle. The club is a sleeping giant working its way back into the limelight. Currently 3rd in the table there is every possibility of promotion into the Championship. Only four years ago we were down in the Conference."

"Trying to prevent games being called off during the winter months is still a bit of a lottery. Until we manage to get the under soil heating up and running we will be in the lap of the weather gods. Flat sheets can prevent overnight frosts but prolonged frosty weather will eventually lead to deep seated frost damage, which inevitably leads to games being cancelled."

"Like most groundsmen I will be looking forward to the spring and some warmer weather to stimulate much needed grass and root growth. During this year's renovations I am hoping to Koro off the top 20mm of vegetation, re-level and reseed, setting the pitch up for our next - and possibly biggest challenge - dealing with Championship football. Up the Blues!"