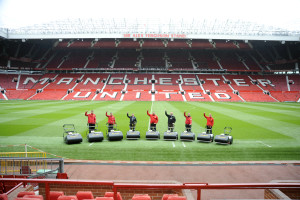 Manchester United FC is reputed to be the most popular football club in the world with one of the highest average home attendance figures in Europe.

A far cry from a club that began life in 1878 as Newton Heath LYR Football Club, formed by the Carriage and Wagon department of the Lancashire and Yorkshire Railway.

Today's high sided stadium at Old Trafford, dubbed the 'Theatre of Dreams', regularly accommodates more than 76,000 people and requires a carefully managed programme of pitch care, given its climatic conditions.

As you would expect, Grounds Manager Tony Sinclair, with the club for over twenty-five years and previously Head Groundsman, maintains a strict regime and is responsible for all the club's sites. He has twenty-three pitches to oversee stretching from Old Trafford to the Aon Training Complex at Carrington, where Joe Pemberton is Head Groundsman and he and his team are responsible for the day to day maintenance of the site, and the Cliff, the old training ground in Salford which still hosts some Manchester United Academy matches.

The club has a long established relationship with Allett Mowers dating back over twenty years and in recent times Tony and his team have worked closely with the company in the development of the latest generation of Buffalo cylinder mowers. The process began when Allett left several machines with the groundsmen to trial and list their suggestions on improvements they thought could be made, enabling them to have direct input in the evolution of the mowers.

The results seen in the Buffalo 34/5 include mounting the engine centrally on the chassis, giving the user a better view of the cutting area, a larger diameter front roller for straighter lines and less ground pressure and, what Tony sees as a huge advantage, the 200mm diameter 8 blade cutting cylinder designed to cut long and wet grass. Using the mowers over an extended period also led to the introduction of one handed fitting and removal of the grass box, facilitated by adding a handle and grass box hoop in place of arms.

A feature extended across the Allett range. "I think the Allett Buffalo has always been a very good, well built machine," says Tony "and we were so pleased with the developments on this latest mower, it's just what we were looking for. It's more lightweight and produces a fine finish while being easier to operate. In fact, it is so good we bought a very successful package of nine new machines." Four Buffalo 34/5 mowers cover 90% of the cutting done at Old Trafford while two manage the pitch at The Cliff.

Over at the Aon Training Complex, Manchester United's training ground and Academy base, three Allett C34's with Verticut cartridges and trailing seats are employed to maintain the sixteen pitches. "We were very pleased to be involved in the developments for the Buffalo," Tony adds, "and whilst we do of course have our granular and foliar programmes, the Old Trafford pitch is doing well. There is no doubt in my mind the Buffalos contribute to that." The Allett mowers were supplied to Manchester United by Peter McGreavy, Sales Director at Cheshire Turf Machinery, who will also provide full servicing facilities.