0 University of Kent - a matter of degrees 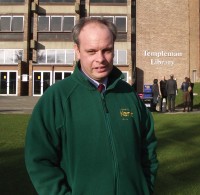 A Welshman through and through and, not surprisingly, a passionate rugby man, Paul Griffiths has, these past twelve years, become a Man of Kent, in outdoor spirit and by definition, because he lives and works on the east side of the county's River Medway.

He became Grounds Maintenance Manager at the University of Kent's Canterbury campus a year ago, taking over from Mick Woods, who had been looking after the grounds since 1975. Paul says these were big boots to fill. He had previously been the Senior Groundsperson, looking after the university sports pitches - grassed and artificial - but this was a big mantle of responsibility and one that would necessarily take him away from daily hands-on pitch care and into the realms of overall management - groundcare and men.

Paul's early move into groundsmanship was, he admits, vague and without any specific aim in view. In 1992, after leaving school, he embarked on a City and Guilds NVQ in General Horticulture at Riseholme College in his home city of Lincoln, and was pretty much coerced into it by his parents. He liked it and a further 2-year National Diploma course followed. His initial venture into turfcare meant moving south, and it was a job on the grounds at Oaklands College in St Albans that set him on his way. It was being appointed head groundsman at Dover Athletic in 2000 that really sealed his career though and got him putting down Kentish roots, he says. He settled at Ramsgate, where he and his wife started a family, but was at the Dover club's Crabble ground for just a year when he became the victim of stringent budget cuts. He retains a fondness for the club, referring to them still as the mighty, mighty whites.

East Kent is renowned for its golf clubs and Paul sought to get his career back on track by a move into greenkeeping. He sent his CV to the host of private clubs in

the county's easternmost Thanet area in particular, and was soon rewarded with an invitation to take up a greenkeeping position at Westgate and Birchington Golf Club, a cliff-top course not far from Margate, where he learned much about fine turf care - and Kent's weather extremes.

It was in 2006 that Paul applied for a place at the university. He was successful and engaged by the Estates Department as a senior groundsman. At that time the grounds extended over nine hectares but, because the university has continued to expand, with more teaching blocks and student accommodation, this has been reduced to 6.5 hectares. The responsibilities are no less challenging however and, if anything, the demand for yet higher standards for outdoor sports and amenity facilities keep on growing.

The site is surrounded by farmland, principally arable and orchards, and the grounds maintenance department itself, where machinery is kept and maintained, is a series of former farm buildings, including a listed barn.

The Grounds Department has eight full-time staff and is an integral part of the University's Estates Department. Paul's head groundsman, Chris Wright, who was promoted to the role he held a year ago, is kept pretty busy and his results are impressive enough for him to be nominated for 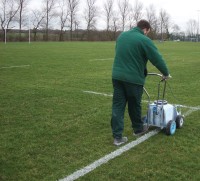 Non-League Groundsman of the Year. Paul says he tries these days not to get out on the pitches as much, not wishing to intrude in the day-to-day work carried out by Chris. The Estates Department wanted someone who would play an active part in policy meetings and the like, so his job has changed significantly from what it was a year ago. His main role now is to oversee the whole picture.

Chris has the support of Dave Crowe, who started working at the university as an apprentice assistant two years ago after completing groundsmanship studies at Hadlow College, Kent's principal horticultural study centre. Dave is the fifth apprentice to have worked on the university pitches since the scheme was introduced four years ago. It's a feeder source for talent, you might say. Two other members of the team are in charge of all amenity grass surrounding the university buildings and student blocks. Regular cutting by triples takes place over nine months of the year.

The pitches - grass and artificial - are all on what is known as the Park Wood part of the campus. The grassed area comprises three football pitches, two grass rugby pitches, and an 11-strip cricket square - all of it heavily used, week in week out.

The underlying soil is heavy, claggy clay, so drainage is an ongoing problem and drains installed some years ago are only at ten metre centres. Before Paul's time, they used to have a contractor carry out vertidraining, but now they use their own - both Wiedenmann and Sisis Mega-slit - and pretty much keep on top of it. If waterlogging ever occurs, Chris does not hesitate to put a halt to keep players off, though this is rare. Paul sympathises with the problems he himself had until a year ago, and backs Chris to the hilt with such decisions.

Student football is played to a pretty decent standard, with the first team playing in the East Kent League. All told there are three men's teams and a ladies team, with season-long mid-week and weekend fixtures. Mini pitches are also made available to Canterbury Youth Football and the Under-16 Academy at Kent's only Football League club, Gillingham.

There is slightly less pressure on the rugby pitches, with fixtures confined to mid-week during term time only. American Football had also been popular with students in recent years and a dedicated pitch set aside for it. This waned and, at the request of those still wanting to pursue it for a handful of games, the hard-hat sport shares one of the rugby pitches.

"The biggest problem with American Football is pitch marking," said Paul. "We had to have number templates made up by staff carpenters. I'm very much a believer in sport for all, but we're not heartbroken that the game is now off the students' agenda. One game on the rugby surface virtually obliterated it, so we had to put a stop to it.

"Rugby is a running game," he said, with an engrained empathy. "Its affect on a pitch is more evenly spread. The American game gives a pitch a very central, unforgiving pounding. As turf carers, we're not sorry to see the back of it."

Paul is also responsible for maintaining the extensive amenity areas around all of the university teaching blocks and student accommodation. Completing the department team and working for him in these areas are a senior tractor driver who handles all of the flail cutting and hedge work, plus a tree man and a gardener for the bedding. All told his responsibility spans the university's whole 300-acre site. His work will also include keeping the campus roadways and car parks clear and serviceable. Last winter, this was a massive task and, mercifully, twelve months on, with milder conditions predominating, he and his team are able to concentrate on groundswork duties. The pitches are all the better for it, he says.

The Park Wood artificials have been in place since September 2005, installation being conducted by specialist contractors McArdles. There are two pitches: a sand-dressed Astro for hockey and a 3G rubber-crumb pitch for football. Paul and his team handle the maintenance in-house.

The 3G is used for inter-college tournaments, which means that wear and tear is relieved from the grass pitches, and a machine bought from Artificial Grass Maintenance - a 224cm working width Double Renew2 brush and rake behind a John Deere 740 - sees that brushing, decompacting and crumb redistribution is effectively conducted in a single pass. This is done at least once a week.

The university has about 18,000 students - 5,500 of them living on its Canterbury Campus - and it's one of the country's burgeoning centres of learning. Business is decidedly good. A report published in January highlighted the £0.6 billion it contributes to the economy of the South East, and this has a doubled over the past five years.

Paul says there is a very healthy relationship between student and grounds team.

"The university's Conservation Society, with a new Environment Coordinator in place, has done much in recent times to foster student involvement in things 'green', and there is noticeably a lot more respect these days for their work.

"There is one big difference between a university and a school at grounds level, which I believes is very largely responsible for this. Sport is not part of the curriculum. Those that take part do so simply because they want to - just for recreation. That gives them a vested interest in how good the pitches are."

Universities have to be businesses as well as centres of learning, and funding for groundcare is tightly controlled. Paul says, however, that his department is very lucky and, if a case can be made for new equipment, he gets a very fair hearing with first the maintenance manager then business manager and accountant, the final decision resting with the estates director.

In the past there had been a tendency to hang on to old equipment as long as they did a reasonable job.

"When I first came to the university, we had a triple that must have been at least fifteen years old. It was hanging on by a thread," said Paul. "We're trying to get away from that these days, making sure we keep our machines up-to-date, and our business manager is now looking at lease purchase as the way forward. We have no affiliation with any particular manufacturer and always try to be entirely pragmatic about every single acquisition."

"The only area where we import help is what I call weed and worm spraying of the sportsfields. We get a contractor in twice a year, in April and October, to handle this for us. With only six hectares it is not worth investing in specialist kit."

Summer schools on the campus ensure that grounds work at Canterbury is very much around the calendar. An added pressure this summer will be the presence of the Nepalese Olympic and Paralympic squads, though Paul is uncertain yet what their pitch demands will be.

"University life is just great," says Paul. It certainly seems so because, if time allows, he intends to embark soon on a part-time degree in animal conservation.