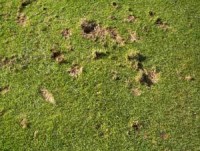 Symptoms of turf discolouration and the now familiar site of crows pecking the ground would lead one to believe that leather jackets or chafer grub were the problem, but this is not the case.

The damage is in fact due to a lesser known insect, the St Marks Fly (Biblio Marci). It is one of a group of insects often referred to as bibionid flies. They are characterised by their stout, black, hairy bodies and long legs. (males 12mm and females 14mm long). 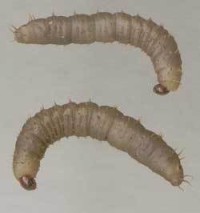 Bibionid flies usually lay their eggs in grassland or soils high in organic matter. Eggs are laid in one cluster, between May and August resulting in isolated groups of larvae numbering over 30 at a time. Eggs hatch in late summer, and as larvae grow they feed on decaying organic matter and live plant tissue. The larvae sever the roots of grass causing reduced uptake of nutrients and water, and hence damage is often most severe on turf suffering from other forms of stress like low fertility. Turf damage becomes evident in November / December and shows as yellow patches within the turf sward.

In agriculture, some success has been achieved with insecticide treatments whilst the larvae are still small, but control becomes much more difficult later in the winter as larvae grow and migrate deeper in to the soil.