Worcester Warriors are playing on an upgraded pitch this season, the latest example of 12yrs continued investment, which has helped take the club into the Premiership.

When Cecil Duckworth, (whose Worcester Heat Systems - now Worcester Bosch- gave the world combi-boilers) became the club's benefactor, the Warriors were in the Midlands Regional Division and rugby was about to turn professional. Twelve years of continual development have seen the construction of a new stadium, new stands, conference facilities and offices as well as the creation of a rugby academy. Plans for a new North stand, a huge Park-and-Ride facility plus a health and fitness club, have been passed by local planners and await affirmation by the Government West Midlands office. Meanwhile, the main pitch has been upgraded to match the new stadium.

"We're on solid Worcestershire clay, and last season the players were going through the surface," says Head Groundsman Derek Woodhall. "This is our first Fibresand pitch and it's reserved for the 1st team, the A team and occasional academy games."

J. Pugh-Lewis Ltd. came in May to start the renovation. "Our major concern was the existing drainage, which had capped over in the last few years," explains James Pugh-Lewis. "What we found when we investigated was that the pipe drains and sand slits were still in good order lower down, allowing us to lay the new surface and still retain the existing drainage system, although we did have to install some additional sand bands to make sure it connected well." To create the new pitch 600 tonnes of sand and rootzone was spread, including over 400 tonnes of Fibresand concentrate. Premier Pitches Ltd., who specialise in Fibresand surface preparation were put in charge of the preparation and seeding works. "We seeded the pitch in July" remembers Carl Pass, "using a ryegrass mix containing top cultivars such as Verdi, Bizet and Churchill."

Later that month Pugh-Lewis turned their attention to the construction of two new pitches, which would host amateur games. Initially a cut-and-fill operation was carried out to level the site. After this the pitches were laser graded and pipe drains installed at 6m centres. "The new Park-and-Ride facility will be on the site of some of the training pitches and the club wanted to create new pitches over the road," explains James Pugh-Lewis. "These pitches are soil-based, with some sand amelioration. One of them also has sand slits installed directly into the seedbed, using a machine we have been developing since last Autumn." 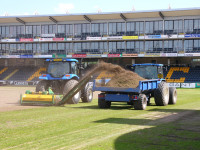 Worcester Warriors are not only one of the more impressive clubs with a modern ground and the space to expand, but they also play host to the game in all its forms. "We have a huge Mini Junior section, Colts, two Ladies teams and our amateurs Worcester Wanderers," says Press and PR manager Mark Higgitt. "Our academy, which is one of the country's more successful continually provides us with skilled new players. We've got five academy lads in our first team squad at the moment and we had four last year."

Now that the season is underway what does Derek Woodhall make of his new main pitch? "Our first game was against Bristol on the first Saturday in September," he says. "The game against Leicester was particularly heavy and so far the pitch is standing up well. The drainage is as good as you can get in Worcestershire."

For further information in the construction and drainage services of J Pugh-Lewis, contact the company on Tel: 01773 872362 or visit their website at: www.pugh-lewis.co.uk