by External source
in Synthetics, Rugby, and Industry News
on 30 Jul 2016 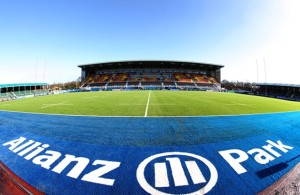 SIS Pitches has announced the upgrade of the synthetic pitch at Saracens, the reigning Aviva Premiership and European Rugby Champions Cup holders.

The new SISTurf system comes three-and-half years after the original installation at the club's Allianz Park. During this time Saracens have won the Aviva Premiership twice and European Champions Cup and LV Cup once.

The pitch will also feature a new, larger sized recycled infill, which helps promote better drainage and less compaction than the current pitch, and helps provide a fast and safe playing surface, perfect for top level rugby and mid-week community use.

Bryn Lee, Managing Director at SIS Pitches said: "We're delighted to be working with the best Rugby Union team in Europe. Since the first surface was laid at Allianz Park four years ago Saracens have achieved huge success domestically and in Europe.

"The current pitch meets World Rugby's vigorous performance standards and the new surface will be even more advanced. I am sure the club's successes will continue and spectators will see many fine tries scored on the fast new surface," he added.

The existing pitch will now be carefully lifted ready for installation elsewhere, and despite over 350 matches, an estimated 7,750 hours of community use and close to half a million spectators able to walk on the pitch after matches, the surface still has plenty of life left in it.

Richard Gregg, Stadium Director at Allianz Park said: "We are upgrading to a better product and our current pitch will be relocated and continue to be used in our wider community for the duration of its lifespan."