Mark Burrows has worked at Uppingham School for over twenty years, and was promoted to Grounds Manager four years ago. He leads a team of four who are responsible for all the sports pitches and their surroundings.

Uppingham School was founded in 1584 by Archdeacon Robert Johnson and, over time, has developed into a large independent school, boarding nearly 750 pupils.

In 1815, the first recorded cricket match took place against nearby Oakham School and, in 1859, it became the first English school to establish a gymnasium followed, a year later, by the first swimming pool of sorts, known back then as a 'bathing place'. In 1883 - and a first at a school anywhere in the world - Uppingham School opened a 'proper' swimming pool.

The school has an enviable number of playing fields, covering some sixty-five acres. Depending on the season, these will accommodate many different sports. In the autumn term, for example, nine rugby, five hockey and two lacrosse pitches are provided. There are also three artificial surfaces that double up for hockey in the autumn/winter term and tennis in the spring/ summer term, year round artificial tennis courts, hard surface areas that provide tennis and netball dependant on season, fives courts, a shooting range, climbing wall and, in the summer term, the winter pitch areas are changed to cricket and athletics provision.

Overlooked by the sports centre is the 1st XV rugby pitch, accompanied by two further full size rugby pitches. These have a new thatched pavilion providing storage and changing facilities. The reorientation and pitch construction was carried out by White Horse Contractors. The construction consisted of a cut and fill operation, installing primary drains at five metre centres, and sand bands were also added to the first team pitch. These playing fields provide rugby pitches and training areas during the autumn winter months, with a full size athletic track marked out on the 1st XV pitch in the summer months.

Like many pitches at public schools, they are used on a daily basis and, at weekends, the staff cover weekend fixtures on a rota basis, often working a twelve hour day during cricket season to accommodate fixtures.

All the rugby pitches are cut using a Trimax ProCut rotary mower, once a week, whilst the grass is still growing, if conditions allow, maintaining a height of cut at around 40mm. They are marked out for every fixture using spray jet linemarkers. 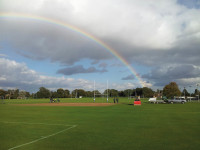 At the end of season, renovations take place, the pitches are scarified, topdressed with 100 tonnes of sand and oversown with around ten bags of MM60 grass seed per pitch.

In summer, the school has, in total, seven cricket squares which are accommodated on the schools 'Middle' and 'Upper' playing field sites.

During the winter months, the 'Middle' ground provides twelve grass pitches, including six rugby, four of which change to football after Christmas, the remainder being used for lacrosse and hockey. These pitches are also mown weekly during the growing season, if conditions allow.

Renovations for these pitches are governed by their needs. All are scarified, and 'vertidrained' as much as possible using a Wiedenmann XP6. Overseeding of thinning and worn areas is also carried out.

During the summer, the predominant sport is cricket, with the staff looking after several squares. The main square, plus one other, are Ongar loam, whilst the remainder are Mendip loam.

End of season renovations see a robust programme of aeration and scarifying with Sisis tractor mounted equipment; several passes of the scarifier are made until all unwanted detritus and vegetation are removed. The surface is then power-brushed, leaving a clean surface to receive the MM50 seed and topdressing. Approximately seven or eight bags of loam per pitch are used.

During the summer months, the squares are mown at 12mm, with wickets prepared on a seven to ten day cycle, gradually reducing the height of cut to 3-5mm, depending on the level of cricket. A brand new wicket is produced for each 1st team game, with other pitches being used for practice or, after repair, for further matches.

The school also has a number of synthetic playing surfaces for hockey, but these may also be used for training in adverse weather. Mark explains that a thorough maintenance regime is carried out to help keep them clean and operational and, to that end, the school has invested in a Hoerger SKU synthetic turf cleaning machine that is able to brush and deep clean the surfaces. This machine lifts the fibres and the infill, sieves the debris and returns the infill to the surface, where it is brushed back in by the rear brush. It has been a good investment for the school and minimises the surface compaction and contamination, which all artificial pitches suffer from. As with most public schools, the sports pitches are in high demand, so it is important they are prepared and repaired efficiently and professionally to ensure they are fit for purpose and inspire the pupils to perform.