Use of Weed-IT instrumental in Cardiff's Britain in Bloom success 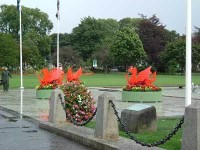 Staff at Complete Weed Control (South Wales) joined Cardiff's Lord Mayor and council officials in celebrating after the city won the 'best large city' award and was one of seven entries to receive a gold medal in this year's Britain in Bloom competition. The contribution that Alan Abel and his team made to the city's success was noted by the judges, who paid tribute to the cleanliness of the city and stated that they were "particularly impressed by the use of the new Weed-IT technology".

Weed-IT is a computer-controlled herbicide application system specifically designed for use on footpaths and other hard surfaces. The purpose built mini tractor has a shrouded spraying head on the front. Within this are sensor units, which detect the presence of weeds and trigger the spray nozzles to apply the correct amount of herbicide accurately, eliminating the risk of spray drift and off-target contamination.

Over the past five years, Complete Weed Control has operated a fleet of five Weed-IT vehicles in Cardiff, where the Council's Operational Manager has recognised the importance of a planned weed control programme that incorporates the most advanced application technology. Regular applications, interspersed with spot treatment and hand-weeding when applicable, has been instrumental to the city's Britain in Bloom efforts. 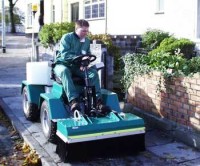 They've also recognised that weed control is a specialised operation, with strict legal and Health & Safety demands placed upon those carrying out the work. In keeping it separate from other grounds maintenance work, such as grass cutting, litter collection and road sweeping and by awarding a five-year contract to Complete Weed Control (South Wales), it has not only ensured continuity, but has also enabled the company to make the necessary investment in equipment and the training of staff needed to ensure that all work is carried out to the highest standards.

Mike Clark - Operational Manager (Parks and Bereavement) from Cardiff County Council commented: "The success of our working relationship with Complete Weed Control (South Wales) has been thanks to a partnership approach and the use of long term contracts. This way of working combined with Complete Weed Control's new technology have played an important part in Cardiff's recent success in both 'Wales in Bloom' and 'Britain in Bloom'."