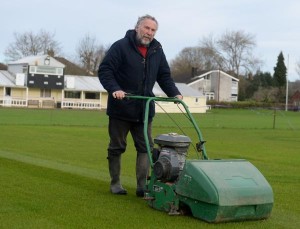 Chris Morse, 60, has been the groundsman for the club for the past 24 years and won the groundsman of the year for the Marleybone Cricket Club universities category. The award was presented on behalf of the England and Wales Cricket Board at a ceremony on Friday.

Mr Morse said: "It was a very pleasant surprise. I didn't know anything about it until Sunday.

"Its an achievement for us as we were up against bigger universities such as Loughborough, Oxford and Cambridge."

He added: "The start of this spring/summer was particularly wet so we mainly kept the ground covered. All matches at Usk were kept on while other grounds called them off.

"We don't have a team of groundsman it's mainly myself with a few volunteers who help out at busy times."

The grounds in Usk is the key home ground for the Cardiff MCC University, which is one of six University Centres of Cricketing Excellence supported by the Marylebone Cricket Club and includes Cardiff University, Cardiff Metropolitan University and the University of South Wales.

Mark O'Leary, head coach of Cardiff MCCU, said: "It's a great achievement for Chris who puts a lot of work into the grounds. We need a high quality ground as we have first class status."