US Soccer cancelled a friendly on Sunday between USA and Trinidad & Tobago in Hawaii over concerns about the playing surface. 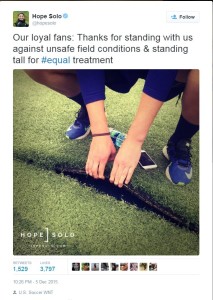 The women's match was scheduled to take place at Aloha Stadium, and many of the USA players were concerned about the pitch. One of the team's stars, Megan Rapinoe, tore her ACL during a training session on Friday. That incident took place on a different surface but former USA midfielder Julie Foudy said the training pitch was reported as being "equally poor".

"We extend our sincere apologies to those fans who were scheduled to attend the [USWNT] match in Hawaii," read a statement from US Soccer. "Player safety is our number one priority at all times and after a thorough inspection throughout the day, we determined it was in the best interest for both teams not to play the match."

The cancellations of the game is likely to cause controversy. The pitch at Aloha Stadium is artificial turf, and players had already campaigned against playing on the surface at this year's World Cup. On Saturday, another of the team's stars, Carli Lloyd, voiced her concerns over playing on the surface.

"I'm very disappointed with the surface to be honest," Lloyd told Hawaii News Now. "I think coming to Hawaii is great and it's great to be able to play here, but when you take a look at the field it's just not good enough. We're playing eight out of our nine Victory Tour games on turf and it's honestly not good enough and we fought to not play a World Cup on turf and now post World Cup, every venue we're playing at is a turf field."

The US men's team have yet to play on artificial turf this year, a point made by striker Alex Morgan.

"The team needs to be a little more vocal about whether this is good for our bodies and whether we should be playing on it if the men wouldn't be playing on it," she told Fox Soccer. "We've been told by US Soccer that the field's condition and the size of the field are the first two talking points of when they decide on a field, so I'm not sure why eight or nine of our 10 Victory Tour games are on turf whereas the men haven't played on turf this year. There have been zero games, so that's a concern of mine."

USA goalkeeper Hope Solo had also expressed her displeasure with the pitch on Twitter.

No time frame has yet been given for Rapinoe's recovery but it could be serious enough to rule her out of next summer's Olympics in Rio de Janeiro. The US team are the reigning Olympic champions.

"I want to thank my team-mates and the staff for the amazing support I've received so far," Rapinoe said in a statement. "I know I'll be in the best of hands moving forward and I'll be doing everything I can to get healthy as soon as possible.

"This is obviously a very difficult time, but I do feel super confident in my recovery as I've gone through this before and I know what the process will be like. I want everyone to know that I'll be fine, and that I'm currently accepting any recommendations for TV shows to binge watch and great restaurants that deliver in Seattle. I'm also going to get really good at Fifa 16."

The US coach, Jill Ellis, said she had faith that Rapinoe would be able to recover as quickly as possible.

"All of our hearts feel for Megan and she's certainly a major part of this team, both on and off the field, so to see her go down is tough," said Ellis. "Players getting injured is always hard, but all of her teammates know that one of the strengths of this team is depth and everyone in the player pool is prepared to step up as we continue to prepare for Olympic qualifying. Megan has a great support system and she's very resilient, so we know she will be back as soon as possible."

US Soccer said that fans who had bought tickets for Sunday's game will be able to get a refund.