0 USWNT push for new deal and make clear: we are not playing on artificial turf

The agreement between the US women's team and the federation is set to expire later this year - which means a chance to fix issues that aren't quite right. 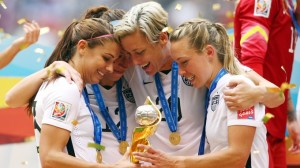 When the US women's national team pulled out of a recent game in Hawaii in protest at subpar pitch conditions, it seemed as though it should've never reached that point. It seemed the standards of playing surfaces for the tour should've been spelled out beforehand - but they weren't.
But with the collective bargaining agreement between the USWNT and the federation set to expire later this year, , there may be new opportunity to ensure the players and US Soccer are on the same page.

Rich Nichols, the attorney representing the women's national team union, declined to discuss the specifics of negotiations, but told the Guardian several times: "They are not playing on artificial turf. Period."
"It shouldn't need to be a topic we even have to discuss," Nichols added. "If there is modicum of respect and concern for the health and safety of the women's national team, we shouldn't even need to have one second of discussion about safe playing surfaces.

US Soccer does have a history of putting matches for the men's national team on grass, even when they play at venues with artificial turf. In some cases, the men and women have played in the same venue recently, yet the men played on temporary grass while the women played on the turf.

A US Soccer spokesman declined the Guardian's request for comment, but the federation has previously denied that there is an agreement for the men to only play on grass. US Soccer president Sunil Gulati suggested the men may play on artificial turf this year, even though the federation hasn't put a men's match on artificial turf since at least 2005.