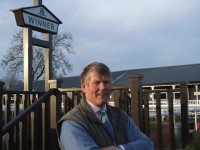 "Summer jumping has certainly enhanced Uttoxeter's programme - what could be better than a 10,000 strong family crowd on a July Sunday?"
Charlie Moore, Clerk of the Course, Uttoxeter Racecourse

They say there is no substitute for experience, and Charlie Moore's return to Uttoxeter for a third term as Clerk of the Course at the Staffordshire track in 2010 is proving a vital strand in a strategy to overcome the difficult financial climate and challenging weather patterns.

On a Saturday in November, when up against Cheltenham's open meeting, Uttoxeter drew in a crowd of 10,000 for its Beer Festival meeting, highlighting the emerging role of racecourses as social as well as sporting attractions.

"We race eleven months of the year, with our key fixture being the Betfred Midlands Grand National at the end of Cheltenham Festival week, and well supported meetings on New Year's Eve and the week before Christmas. It's important to retain these historical slots in the fixture list to maintain our level of business," Charlie comments. 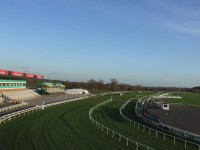 In common with other leading jump tracks, Uttoxeter supported the campaign for summer jumping, which has added extra meetings alongside its popular Summer National and Ladies Night meetings.

"Summer jumping has certainly enhanced Uttoxeter's programme - what could be better than a 10,000 strong family crowd on a July Sunday?"

Aside from the attractions on offer - ladies' day, beer festivals, Christmas markets - pulling the crowds depends on drawing quality runners and riders to the track and, with no real catchment area of trainers locally, that means delivering consistent going and competitive racing.

With fixtures as little as six days apart, this is no mean feat on a track which is 1 mile 2 furlongs round, and surrounded by industry, a railway line and a golf course, allowing little opportunity for expansion. In addition to the racetrack, the grounds team is responsible for maintaining all of the ornamental areas, car parks and the centre course, which includes a show ground and caravan club site, in use from March to November - mowing this area alone takes six and a half hours. The racecourse buildings are in constant use for events, so presentation has to be at the highest level year round.

"We have an agreement with the local Byrkley Plant Centre for the provision and planting of all flowers and bedding plants; Uttoxeter Racecourse looks splendid in summer and won a Britain in Bloom Gold award this year," says Charlie. 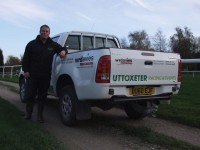 He credits the groundstaff for their outstanding dedication to coping with such a substantial workload: "I am fortunate to have an exceptional grounds team, led by Rob Massey, with four full-time staff and, in addition, our Executive Director, David MacDonald, who knows how important the track and surroundings are to our racing and the business," explains Charlie. "We also use contractors Turf Services, plus casuals on racedays to help repair the course."

He admits that the gap between the Christmas meeting and New Years Eve fixture is the toughest one in which to prepare the course, fitting in staff holidays, and is a time when favourable weather definitely helps. "The end of November fixture can also be tricky - if it is wet, it puts pressure on for the whole winter," he says.
Charlie comments that the weather is the common factor for all racecourses in determining how easy they are to look after.

"Winter 2010 was characterised by the cold and then dry weather, and the turf itself has been relatively easy to manage. But, we lost a large number of plants, including all the David Austin Molineux roses around the parade ring, which sits in a cold hollow. This area was frozen for three weeks solid, with temperatures down to minus 18OC."

Uttoxeter was the only racecourse in the Northern Racing group to race in December 2010 with its New Year's Eve meeting, although the loss of the Christmas meeting illustrates the challenge for groundstaff. "We had covered the course so were ready to go, but were just about to uncover when the snow started to fall and we had to abandon. But the covers then stayed on until Thursday 30th when we had to take them off to allow any frost to thaw, and New Year's Eve went ahead. Then, on January 29th, we removed the covers on the morning of the meeting and the temperature subsequently dropped to minus 5OC. But, because we'd had them on, we were able to race."

Some covers are hired in from Sports Stadia Ltd, who supply the labour to lay and lift them, easing the pressure on the groundstaff. Uttoxeter also has its own fleece covers and two of the stables have been deployed to store them.

"Being able to protect the course is a real step forward," comments Charlie. "It doesn't always allow you to race, but increases the chances and, more importantly, allows an earlier decision, which is better for the trainers and for the public. The bad winter in 2009/10 woke everyone up to the potential of using covers, and by last winter we were all more prepared."

As the course sits in the Dove Valley, with one stream running alongside and another through the centre, an ongoing drainage programme has been instigated, and irrigation rejigged - in the 1980s it was notoriously wet.

"We put a lot of water on in the summer. As the home straight slopes away from the grandstand, it runs down the hill to the back straight which was always wet, so we cut down the irrigation in this area and have addressed the drainage," explains Charlie.

Over the past ten years, contractor John Mallinson has installed sand slits over the lateral drains at 2m centres and, in 2011, the entire course was dressed with 685 tonnes of sand to help the drainage and increase surface stability. The next phase will see more sand slits added to reduce the intervals to 1m. "Time and cost restrictions meant starting off at 2m centres, but this has been very effective, so we want to enhance it with the narrower spacings. In early October 2010, we had 30mm of rain on the day of racing and still raced."

All major works have to be slotted in between the end of July and the beginning of September, when racing does not take place and, given time for recovery, this effectively means a two week window.

Overseeding is shoehorned into another short gap in the programme - ideally this would be after the Betfred Midlands National, but the low soil temperatures mean that April is a better bet.

"We like Barenbrug Bar Sprint, because it germinates well in winter and has proved very reliable. But, the divot mix is also significant in promoting regrowth - the Whitemoss organic mix is very productive, with good germination and minimal kickback." 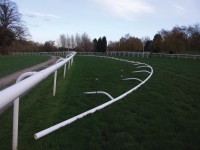 The biggest task in preparation for each meeting is moving miles of running rail to provide fresh ground.

"You can do it with two men, but they know they've done it at the end of the day! Three is better," comments head groundsman Rob Massey. "We also have to move the fences laterally across the course to the new running line, so having Turf Services to look after the divoting is vital."

Expenditure on machinery has been restricted in the current financial climate, so meticulous care of kit, under the guidance of deputy head groundsman and 'machinery mastermind' Richard Beech, is the responsibility of each groundsman.

A major project this summer was removing thatch from around the running rail using a flail and vacuum, although a set of Einbock harrows keeps on top of it elsewhere.

"Because of the length of the sward, it is hard to keep an eye on thatch and we only realised there was a problem when we mowed closer ahead of the sand slitting," explains Charlie. "Glyphosate is used to keep growth down around the running rail and avoid time consuming strimming."

Mowing is undertaken as often as possible, although it has to be timed around the irrigation, which is carried out with tow line pipes. "We tend to mow at the beginning of the week as part of the reinstatement programme, using a 4m front mount Votex and blower," explains Charlie. "My only wish is that we could use a lighter tractor than our New Holland TN75, but it has to be capable of handling a front mower deck. The key is to keep the blades sharp - it's surprising how grass will blunt them." 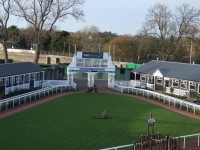 A Progressive Tri-Deck is used to cut the centre course and car parks and was originally mooted for the course, but Charlie comments that it is hard not to leave tractor wheelings with a towed mower unless conditions are very dry.

Whilst British Horseracing Authority recommendations are for cut lengths of 4.5 to 5.5 inches, Charlie comments that research has shown that a 5in cut gives 25 percent more grass cover, and the plentiful cover at Uttoxeter is much appreciated and commented on by owners and trainers.

Rolling is a controversial topic on racecourses, and Charlie admits that it is done with reluctance to give the required presentation, and offset by regular vertidraining, up to three times a year on the jumps track with the course's own machine and annually with a larger, hired unit - and by slitting.

"We are aiming to use a rotary decompacter in 2012 to vary the action," he comments. "Jockey Club research at Nottingham in 1997 has shown that where it is possible - where there are not too many stones etc. - the combination of both types of decompaction gives the optimum effect."

One welcome addition to the groundcare fleet is a pair of new Toyota Hilux pick-up trucks, secured as part of an agreement with local dealer WR Davies of Stafford.
"The trucks make the job a lot easier and are a step forward from the hard top Landrovers we had before," comments Rob. "WR Davies have been very generous and also help out on race days by providing vehicles for the starters and doctors."