Port Vale Football Club was formed in 1876 and took its name from the venue of the inaugural meeting at Port Vale House, situated in a suburb of Stoke-on-Trent. A move to Burslem (one of six towns that make up the city of Stoke) in 1884, saw the name change to Burslem Port Vale and, after several seasons playing in the Midland League, became founder members of the Football League in 1892.

In 1919, Burslem was dropped from the name to create Port Vale FC and, in 1950 the club moved to its present home at Vale Park which, due to its size and the planned developments, became known as 'The Wembley of the North'.

Famous fans include Robbie Williams and Phil 'The Power' Taylor, the former being a major shareholder and with a restaurant on the site named after him.

Their fiercest rivals are Stoke City but, with Potteries derbies now a rarity, unless the FA Cup throws up a fixture, the 'Valiants' now include Burton Albion, Crewe, Shrewsbury and Macclesfield in their hit list of local derbies.

Currently in the play off positions in the Npower Football League Two, Port Vale, like so many other lower league clubs, constantly face an uphill struggle to maintain their status, with spiralling costs on all fronts.

Looking after the 19,000 capacity Vale Park stadium pitch, and the training ground, is Stephen Speed, who has been at the club for thirty-two years, the last seventeen as Head Groundsman. He is assisted by twenty-two year old Glenn Jeneson, who has been with the club for four years, and Isaac Quinn, who joined the team in September of last year as a trainee. 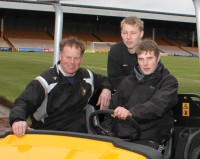 At 525 feet above sea level, Vale Park is the second highest league ground in England, behind the Hawthorns, and its altitude can be a problem, as Stephen explains. "Any severe cold weather always brings with it a wind chill factor several degrees lower. This often means that we will have lower ground temperatures than most of the surrounding clubs. We only have frost covers here, and these are only effective down to minus 4OC. so, as you can imagine, we were fighting a losing battle in the four weeks before Christmas, and had to call off a number of games. And, in any case, we had over six inches of snow on top of them!"

"We are hoping to get undersoil heating, but that's still in the planning stage. But, even that would not have coped with all the snow," Stephen says. "It's a mammoth task trying to shift it."

Stephen was even in at work on Christmas Day in a bid to ensure the Boxing day fixture with Burton Albion had a chance of surviving the elements. He failed, and the game was eventually played midweek on 19th January.

"Our pitch is also clay underneath, which makes drainage even worse, so there was that to take into account during the eventual thaw. As you know, sand pitches drain more freely, and the pitch warms up a lot quicker. Other clubs, who have moved into new grounds, have sand pitches and we have been left behind in that respect."

"The board have done well to invest in improving the ground and facilities but, as always, we could do with more being spent on the pitch which

, along with everything else, is why we struggle when we have severe weather."

The stadium pitch is traditional heavy soil based, with 225mm of soil overlaying a deep clay soil sub base. "Over the years, topdressing with sand rootzone material, along with a good aeration programme, has helped improve infiltration rates."

The training pitches provide two full size senior pitches and goalkeeping areas. They were constructed eleven years ago as sand based pitches, with primary drains installed at five metre centres, topped with a 100mm gravel drainage layer, 100mm of sand and finally covered with 100mm (12,000 tonnes) of 80/20 rootzone material and oversown.

Stephen and his staff often work long and unsociable hours to ensure all the pitches are ready for their intended use. In the summer, the staff often come in at 5.30am to set up and run the sprinklers. These are left on until 9.30am and they wait for the grass to dry before starting to cut it.

On match days, Stephen always gets in early - "anytime between 5.30-7.00am". This allows him time to inspect the pitch and remove any dew, so that it's dry for when Glenn and Isaac come in to begin cutting it at 8.30am.

They cut the stadium pitch in two directions using their Dennis G860 cylinder mowers set at a 25mm, and mark out with a transfer wheel linemarker, aiming to get all the work completed by midday. Portable goals and corner flag are then put out ready for pre-match warm ups and the game.

Warm ups are often a bone of contention with many groundsmen, but Stephen stands his ground if opposing coaches and players overstep the mark. "I've been here so long that I know most of the managers and coaches well," says Stephen. "Pre-match warms up and fast feet drills take their toll on soil based pitches and, even though there are FA guidelines, I do get annoyed when goalkeepers overrun their allotted time. Even with portable goals put out, they still want to use the goalmouths!"

"By communicating my concerns to coaches and officials before they get going, I can usually prevent any awkward situations. Well, I have to date, anyway!"

"Once they've finished their drills, we repair any divots, put away the temporary goals and settle back to watch the first half. We repair again at half tim

e, watch the second half and, then, once the match is over, spend an hour or two repairing and cleaning up the pitch."

End of season renovations are dictated by two factors - the condition of the pitches and what budget is available. With the team in the play-off positions, resulting in higher gate receipts, Stephen remains 'hopeful'. "The plan is to fraise mow the stadium pitch and one of the training pitches to restore levels and remove unwanted poa grasses. The other training pitch will be scarified and topdressed. We'll then vertidrain all three pitches and oversow with Johnson Premier Pitch seed mixtures. We'll then apply forty tonnes of rootzone material to the stadium pitch and thirty tonnes to each of the training pitches."

"It's been three years since any of the pitches were fraise mown, so I'm hoping the budgets will be forthcoming this year. The work is much needed!"

Stephen sticks to a simple programme of granular and foliar feeds, with more feeding required on the more free draining training pitches. "I've not got a large budget for materials, so I have to keep applications to a bare minimum."

For example, last year he only applied ten applications of fertilisers, most in granular formulation. "The first feed was on February 3rd, when we applied eleven bags of 5:6:10 NPK, a

"We cut the pitches every other day and spike with knife tines twice a month, along with some multicoring if conditions allow. I'll also vertidrain the pitches three or four times a year."

He also likes to apply seed as and when he can, keeping as much grass cover as possible.

And what about machinery, I ask? "When I started back in 1979, the club only had one 30" Atco mower, a Sisis Hydromain aerator/brush and some hand tools. Over the years, we have acquired more machinery as and when budgets have allowed. We now have the basic requirements and, in fact, have just bought a brand new JCB Utility Vehicle, which has made life a lot easier to transport equipment, labour and materials to the training pitches."

"In the shed, we currently have an old 36" Dennis Premier, our recently purchased Dennis G860, a Ransomes Tri-King triple mower for the training pitches, two tractors - an old Ford 1520 and an Iseki compact - a Wessex sweeper/collector and a Toro Multicore."

So, in essence then, not a lot of equipment, I suggest. "Any other equipment we need is usually hired, on an as and when basis, from Campey Turf Care. They usually supply the vertidrains when needed. I would like to buy a new tractor when funds become available and, possibly, another Dennis cassette system."

Promotion for Port Vale would certainly help the club's finances and, perhaps, release a few more funds to Stephen. But, talking to him, you do get the impression that he is more than happy with his lot and is doing a fine job on the limited resources he has available to him.

He is very much part of the club's set up, able to share a joke with Phil Taylor or Robbie Williams and his dad, confident enough to tell the coaches where they are going wrong and respected by the club's hierarchy.

The hours Stephen puts in at the club are not unusual for a league football groundsman, but he doesn't stop there! He is also the groundsman at his local cricket club, Bagnall CC, where he is also a player. I asked him what his wife thought about it? "Fine," he said, "I'm not married!"

It would seem he is married to the job.