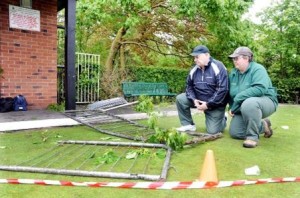 Bowlers at Corporation Park say that their green is at risk of closure after the latest in a string of anti-social behaviour incidents left the ground badly damaged.

The greenkeeper arrived at the bowling green yesterday morning to find that metal fencing, erected to deter vandals, had been dismantled and strewn across the green.

Police are now examining CCTV footage from the scene.

Over the past year, bowlers have complained of teenagers climbing through hedges to get onto the green in the evenings to play football, smoke, or walk their dogs on the green.

John Flannery, chairman of the Corporation Park supporters' group and keen bowler, said he was becoming increasingly worried that the green will no longer be fit for use.

"We put up those fences to try to maintain the hedges that they were climbing through, and now this happens.

"It's just one thing after another, and now our greenkeeper is saying that we'll probably have to close if this carries on.

"A certain group of teenagers come on here and we've tried to talk to them about it, or tell them to move, and we've just got abuse.

"It's reaching a point now where we just don't know what to do."

The bowling club has more than 80 members, most of whom are in their 70s.

The green at the park, like all other bowling greens in the borough, is now self-managed, meaning that John and other members pay annual fees of around £1,000 to pay for the upkeep of the green.

"But we just can't keep forking out every time something else gets damaged, and it would just be such a shame if it had to close."

The matter was reported to the police and a Police Community Support Officer attended yesterday afternoon.

A police spokesman said: "Unknown offenders damaged the fencing and caused damage to the bowling green.

"We are investigating the matter, and are calling for anyone who witnessed the incident to call 101," he added.