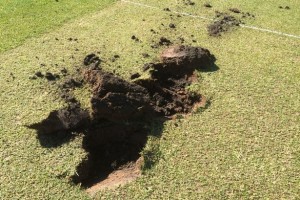 Vandals ripped holes in three strips just at the point where the bowler would pitch the ball, aiming to cause maximum disruption.

Officials at the Bridge Fold club, close to Holmfirth town centre, faced a race against time to cut a new wicket in time for Saturday's game against Meltham.

They also needed special permission for the match go ahead, given the potential dangers of unpredictable bounce on the hastily-prepared wicket.

Club chairman David Whiteley said: "They made a good job of the damage and knew exactly what they were doing.

"They dug the wickets right on a length where the ball would pitch, and from both sides. We think it's someone with a grievance against the club."

Mr Whiteley told how a man walking his dog early on Saturday spotted the damage and rang him up.

He alerted groundstaff who realised the damage was too severe for immediate repair. In fact the wickets may be out of use all season.

A handful of helpers set about cutting a new wicket even borrowing a wacker plate, more often used on roadworks, to compact and flatten the turf.

The club reported the damage to police and informed the league of the makeshift nature of the wicket.

"We told the league what we had done and said we didn't know how it would play and if it might be dangerous with the ball flying about," said Mr Whiteley.

"The league advised us to cut the wicket and let the umpires decide."

The game went ahead with no complaints from the players.

"The players were amazed it played so well," said Mr Whiteley. "I think that was down to the wacker plate."

Despite all the efforts in getting the game on Holmfirth were beaten.

The attack happened some time between the junior players leaving at around 8.30pm on Friday and 8.30am the following morning.

The matter will be discussed by the committee at its meeting on Tuesday.

For the original article, visit www.examiner.co.uk.