Mindless hoodlums have ripped up an amateur football club's pitch by driving a car across it over Christmas. 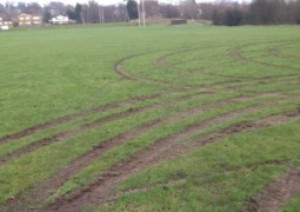 The second team pitch at Belvedere and Calder Vale Sports Club has been left in serious disrepair following the senseless act of vandalism, which took place on Tuesday, December 30th.

Unbelievably, the callous culprits were spotted again driving across the pitch at the weekend.

Both incidents come just a few months after the Holden Road club spent £60,000 on improving pitch drainage and disgusted club representative Phil Ashton said it was an added cost they could well do without.

"We've looked at the CCTV and you can see them doing it but unfortunately you can't see the number plates. The police have been up and looked at the footage so hopefully they can track them down.

"There are tyre tracks all over the pitch. It's predominantly used for second team games and the junior section uses it.

"We're supposed to have games this weekend but there's no way we'll be able to use the pitch. The groundsman has walked it back in but it's hard to do it by foot. We could do with a machine really to help us with it."

It is not the first time the idiotic actions of others have left the club counting the cost. In May 2013, thieves targeted the club twice in four days stealing watches, wallets and wedding rings before breaking into nine cars.

"The club is self-funded from top to bottom and we struggle for cash at the best of times," said Mr Ashton. "Incidents like this just make life more difficult. I don't know what goes through people's heads sometimes."