The hard work of maintaining a vibrant golf green came undone as it suffered extensive damage when it was scorched by youths. 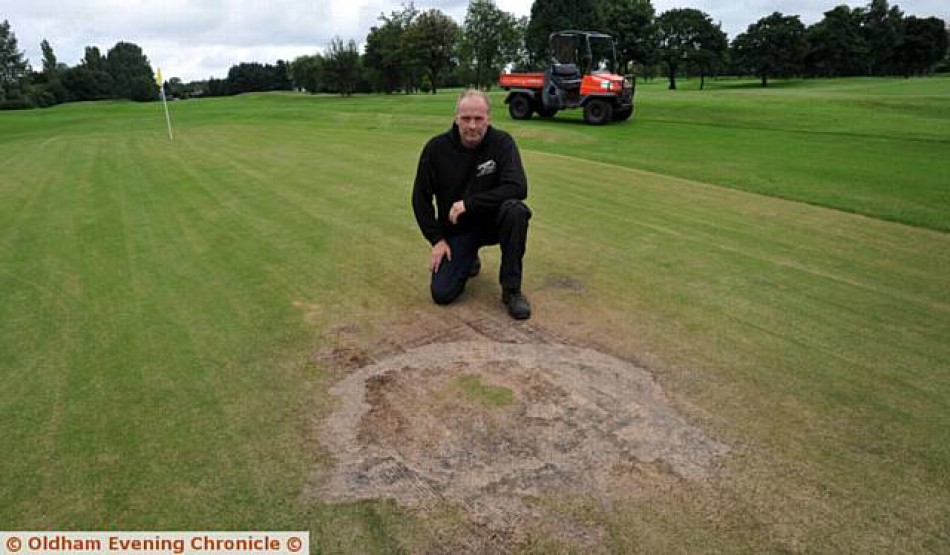 A group of youths took a wheelie bin full of rubbish and then set it on fire on the first green of Werneth Golf Club before fleeing the scene recently.

The fire destroyed a large square of the green and the turf will now have to be dug out and relayed by head greenkeeper Colin Worthington.

Colin was on his way to the club on Green Lane on Monday morning when he saw police officers outside who told him there had been damage to one of the greens.

Looking towards the course Colin said he could still see the flames on the distant green flickering.

While the green is still playable, the charred remains are unsightly on what is a beautifully kept course and Colin said to repair the damage would take weeks.

"I came into work and the police were here and they said there has been damage done to the green. I looked up and there were flames still flickering on it." Colin said. "The damage is quite bad, it has killed all the grass off of it.

"The players can play on it but there is a big burnt patch on the green now."

He said: "I have got to dig it all out and reseed it. The fire has killed all the turf so that will need changing. It will take weeks before it is recovered.

"It is just unsightly, it is more hard work for me during the season. All the work that you put in and then it is just ruined. They have pulled the bin along the public footpath, they have brought it over the road and over the bank. What are kids doing out at that time in the morning?"

Colin fears it may not be the last time incidents like this happen as the club is seeing more youths trespassing on the golf course recently.

He said: "It will most probably happen again. I have had it before were they have burned a little bin before and there are kids on the course everywhere. There must have been 20 kids on the course the other evening. There are people on drugs and everything."

A spokesperson for Greater Manchester Police said: "Police were called at 5.35am on Monday, July 31, to Werneth Golf Club, Green Lane, to reports of a fire on the green. A group of youths set fire to one of the greens and they have fled the scene. Anyone with information is urged to call 101 quoting 335 of the 31st."