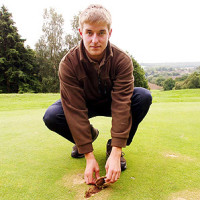 Vandals broke into Dorking Golf Club and caused more than £10,000 damage to one of the greens during a bank holiday crime spree.

The gang smashed through a fence bordering the club in Deepdene Avenue some time between 5.30pm on Monday and 8am on Tuesday and hit a number of golf balls from the seventh green, leaving divots in the course.

It is believed they then used a golf club to dig a further 100 divots across the green, and also stabbed it in various places.

"They've absolutely smashed it up," he said. "I don't know what possessed them to do it. It's very frustrating. It's going to cost us an absolute fortune. We've pieced it back together like a jigsaw but to get it re-laid will cost over £10,000.

"While it's like this we can't charge full price to our golfers so we're losing out there as well."

It is the second time in less than a month that vandals have targeted the course. Overnight between July 29 and 30, large divots were left on the seventh green and the club's watering system was also damaged.

Surrey Police said it was investigating links between these incidents and reports of similar criminal damage at another nearby golf course and garden centre.

On Bank Holiday Monday, damage was caused to a green at Betchworth Golf Course, on Reigate Road, by what officers believed to be pushbikes. The following evening a car was driven onto the golf course, again damaging the greens.

Earlier this month, some time between August 7 and 8, vandals caused damage to various pots and plants at Wyevale Garden Centre, also in Reigate Road.

Anyone with information is asked to contact the Dorking Safer Neighbourhood Team at Surrey Police on 0845 125 2222, quoting reference MV/08/2329.