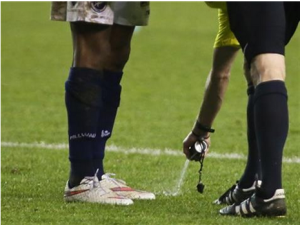 The Football League have confirmed that Vanishing Spray will be used in all Sky Bet Championship, League 1 and League 2 games between now and the end of the current 2014/2015 season.

With Vanishing Spray also in use for all F.A Cup ties as well, it means the refereeing aid will now be available to match officials for all of the remaining games in City's campaign.

The Vanishing Spray, which was used in last summer's World Cup, was first trialled in English football during the early stages of this season's Johnstone's Paint Trophy.

It was brought into the sport with the aim of stopping the wall from a defending team trying to encroach before the taking of a free-kick.

Should it seen action during City's home match with Rochdale this Saturday (10 January 2015), it will be the first time ever that Vanishing Spray has been used at the Coral Windows Stadium.

For the article from Bradford City FC click here.