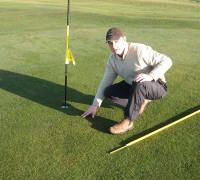 Scarborough's South Cliff Golf Club is a magnificent 120-acre site, with a seaward side overlooking the coast and town.

The 18-hole course, built in 1903 by the legendary Alistair McKenzie, is a challenging one for the 550 members and has benefited over the years from redesigns on bunkers and tees. But there are still plenty of the famous McKenzie run-throughs - six foot drops onto greens that take real skill to negotiate.

Head greenkeeper Paul Sleight (39) has been at the club since he was 20 and qualified at Askam Bryan College, York, with a City and Guilds in sportsturf and commercial horticulture.

"This is a stunning course for scenery and the view over the sea is breathtaking for visitors," says Paul, who lives in the nearby village of Staxton. "That side of the course has a links feel to it while the other side is more parkland. We've added a lot of new features over the years and are considering upping the par from 72. As well as new tees we've lifted greens and reconstructed them, built some stone bridges and constructed an open ditch through fairways."

"We have had some excellent greens committees over the years who have wanted to make changes to keep the course as challenging as possible. The current greens chairman is very good to work with and very supportive of everything we do on the course - he's a real hands-on guy."

South Cliff is mainly clay which, Paul says, has its advantages. "In a dry summer the soil holds moisture, but in the winter we do have to close occasionally when it is very wet."

To overcome drainage problems Paul and the club invested in a trencher and he and his four greenkeeping staff have laid thousands of metres of drains on the fairways. The club has a strong sustainable golf policy and works in harmony with the natural surroundings, maintaining best practice in all aspects of course management.

As part of Paul's continuing quest for perfection on the greens, he's been consulting with Alistair Eccles, Technical Advisor for British Seed Houses for the last three years. Two years ago, he decided to adopt a new policy of overseeding the greens with Level Par to try and out-compete Poa. Level Par is a blend of Avalon and new Vesper velvet bent grasses, a change from the browntop/velvet bent mixture he'd been using previously.

Level Par produces a dense sward, requires minimal watering and is suitable for lower or more traditional maintenance regimes. They have the lowest nutrient requirement of any commercial bent grass species, maintaining growth and colour even in low fertility conditions.

"I'd read the STRI reports which rated velvet bents highly and the results have been tremendous," says Paul. "By incorporating them into the sward we've a much more vigorous, dense sward which gives great colour through the winter and provides a fast, firm surface during the summer. We can cut closer and by cutting frequently we keep annual meadow grass at bay. A combination of verticutting and overseeding with the velvet bents has given us great results."

Because the course is fairly exposed, disease is not a problem but velvet bents show great resistance to fusarium as less water and fertiliser is applied.

"I have been delighted with the results which have lived up to the original reports." says Paul. "I also have to thank Alistair from BSH for all his help and advice."