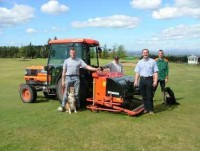 "With its 1.6 metre working width, it's a versatile machine that can be used from 'fence to fence' around the course. We are using it on greens, tees and approaches, to a reasonably shallow depth to help improve the rootzone," he said. "On the fairways, we're obviously going in deeper with a fair amount of heave to relieve compaction. The anti-vibration dampening on the XP coupled with its robust build quality makes it ideal for the rocky undulated nature of the course, whilst ensuring a comfortable ride for the operators."

The Club was founded on May 21st 1895 and celebrated its 110th anniversary recently. Originally laid out over 40 acres leased from Bushes Farm at an initial annual rental of £45, the club moved to its present home in May 1953. The first official Club competition to be played over the new course was a special event to mark the Coronation of Queen Elizabeth.

Today, this moorland course has matured into a true test of golfing prowess. The fairways are fairly wide and most are tree-lined with well-bunkered greens that tend to be large and undulating and, as such, test the putting ability of the player.