0 Versatile dresser that can top up bunkers

Golf Greenkeepers throughout the north of the country are achieving high work-rates and operational efficiencies by using versatile Dakota Turf Tenders distributed throughout the UK and Europe by Campey Turf Care Systems.

The machines allow users to move materials, apply top-dressings, fill bunkers with sand and many other essential turf care tasks. 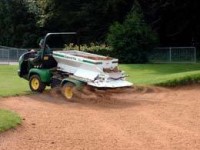 The prestigious Loch Lomond Golf Club, home of the Barclays Scottish Open, has bought a Dakota 440 with 4 x 20in Supertrac turf tyres to simplify many operations. Course Superintendent David Cole says that copious amounts of sands are applied on the course, which is located in an area of high rainfall and has to be kept free-draining.

The high-capacity 440 can handle up to 4.5 tonnes of damp sand and is used to top-dress fairways at the Scottish club. As unloading takes place in front of the operator, work can be clearly monitored from the seat of the tractor powering the unit. The machine's front discharge side arm also enables it to travel alongside and top up other equipment, such as smaller greens top-dressers and a sand-banding machine.

Elsewhere, close to the eastern shores of Loch Lomond, at Buchanan Castle Golf Club, a Dakota 410 is speeding-up the top-dressing of greens and tees on the 18-hole parkland facility. Head Greenkeeper Arthur Bayfield, says that "previously the work took three men all morning. Now, one operator can top-dress 18 greens in under two hours." The 410 has a 0,65m³ hopper capacity and is currently the most popular unit in the versatile Dakota line-up.

A Dakota 412 model is speeding top-dressing work at the famous Muirfield Golf Course, in East Lothian. Course Manager Colin Irvine quickly decided to buy the unit after a demonstration over several fairways. The 1.6m³ capacity machine impressed him with its low draft and power requirement, and its spread width can be adjusted to a maximum 9m.

The 412 exerts a ground pressure of only 6-12psi and is used for applying wet and dry material to the fairways.

Another Dakota devotee is Denis Craggs, Course Manager at Knotty Hill Golf Centre in Sedgefield, County Durham. The facility has recently been expanded to no less than 45 holes, with the bunkers designed to simplify maintenance tasks such as topping up, raking out and trimming edges. The bunkers have no steep sides so that the Dakota can be driven into them for easy filling with minimal raking. "It's absolutely marvellous," enthuses Denis Craggs, who used the Dakota 410 attached to the Centre's John Deere Pro Gator utility vehicle.