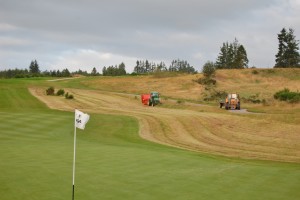 As you would expect, a clear focus and a precise plan underpins course preparations at Gleneagles ahead of the 2014 Ryder Cup.

A Wiedenmann Super 500 was purchased last year (June) by Steve Chappell, Head Greenkeeper at the PGA Centenary Course, with a very specific role in mind.

The Perthshire team chose the Super 500 CHD which comes with a high dump feature as standard. Flail mowing, collecting, verti-cutting and scarifying make this a truly multi-tasking machine. The container lifts via a parallel system to a height of 2.1m while rotating the hopper to completely discharge collected material. Additional scarifying blades and the optional golf course contour kit completed the package supplied by dealers, Fairways GM.

"Some of the roughs hadn't been cut for 20-odd years so there was an immediate requirement to take them right back and clean them out. The main purpose at time of purchase was its flail mowing and harvesting capabilities but its principal duties will switch to scarification and grooming of fairways and roughs," said Mike James, Wiedenmann UK's Northern Sales Manager.