0 Verti-drain and Scout star for Charterhouse 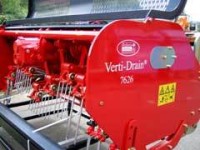 In response to customer demand, Charterhouse Turf Machinery has launched at IOG Saltex an even more rugged version of its famous Verti-Drain deep aerator, in the shape of the mighty 7626 Contractor.

Like its stablemates, the 7626 has tines that create a 'heave' effect as they leave the ground, breaking up compacted soil and improving drainage on heavily used sports turf. The action is the mechanical equivalent of pulling back on a garden fork, but on a much larger scale. Depths of up to 16in (40cm) can be achieved.

The 7626 meets the requirements of many professional users seeking a rugged compaction relief unit capable of the highest work rates. Fitted with a heavy-duty gearbox, the machine weighs in at around 2000kg and requires a tractor with an appropriate lift capacity.

The 7626 is aimed at professionals caring for large open spaces such as soccer grounds and playing fields, and who seek maximum operational efficiency.

"The 7626 is the latest in a long line of developments in the Verti-Drain range, which stretches back over 20 years," says Philip Threadgold, Managing Director of Charterhouse Turf Machinery. "Often copied, they have never been bettered, and the launch of the 7626 is further proof." 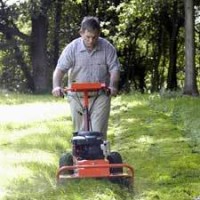 Brushcutting for prolonged periods with a hand-held unit can be a back-breaking task. A solution is at hand in the form of the Scout, a compact unit that is the latest addition to the 'DR' range of wheeled brushcutters.

Distributed in the UK by Charterhouse Turf Machinery, these machines make brushcutting and ground clearance operations a simple operation.

Ideal for use in out of control or overgrown fields, paddocks and verges, garden areas in need of attention, the Scout has the same commercial quality clutch as its larger counterparts. Its differential axle makes for tight turning around trees, stumps, rocks and other obstacles.

The machine's gear-driven transmission provides three forward speeds so that the rate can be matched to the operator's pace and to the type or material being cut.

"The Scout is a genuine all-round workhouse," says Philip Threadgold, Managing Director of Charterhouse Turf Machinery. "Its versatility is astonishing, being able to cut thick grass, clear tough patches of weeds and woody brush, and mowing along fence lines, drainage ditches and paths."

The Scout received its first public showing at IOG Saltex this week.