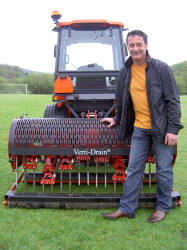 A Verti-Drain from Charterhouse Machinery, and a long-term relationship with the local dealership, is proving a winning formula for Denbigh Golf Club. Located nine miles from Rhyl in North Wales, the 18-hole club has been doing business for 22 years with the Major R Owen dealership of Gwynedd, which is itself celebrating its 30th anniversary, and 20 years as a Charterhouse Verti-Drain dealer.

Denbigh Golf Club's Head Greenkeeper, Dave Goodridge, is a real enthusiast about his Verti-Drain 7316. "It works like magic. It has definitely prevented compaction problems for us, and the Verti-Drain must have helped improve quality at other sports grounds all over the world. It's the perfect machine for the job."

The 7316 model Verti-Drain is a 1.6m (63in) working width machine aerating to depths of 30cm (12in). The high work-rate machine can treat areas of up to 38,000 sq ft (4200 sq m) per hour, although as the Denbigh club is built largely on limestone, Dave often has to proceed slowly and carefully.

The gearbox on the machine cleverly enables operating speeds to be matched exactly in order to achieve the desired hole spacings. "On the greens, however, I can use maximum revs and obtain the maximum heave effect in the ground, giving the best results," says Dave.

"We bought our 7316 from Major Owen six years ago," he continues, "having previously hired a machine from them periodically. I sometimes lend the unit to two other local facilities that are built on clay, and using it has completely alleviated their drainage problems.

"In six years' intensive use, we have only had to replace one bearing on the machine - and that was caused by operator error. When we dismantled the assembly to investigate the problem, I couldn't believe how well engineered and in good condition all the other components were."

Dave bought the Verti-Drain after attending a seminar at which Jack McMillan MBE, former Head Greenkeeper at the prestigious Sunningdale Golf Club, extolled the virtues of the machine (he had been one of the very first greenkeepers to own a Verti-Drain when they were introduced into the UK by Charterhouse Turf Machinery more than 20 years ago."

Dave, who served his greenkeeping apprenticeship at Chester Golf Club and has now been with Denbigh for 28 years, has an excellent business relationship with Major R Owen. He turns to the company's Andy Jones first with any new machinery requirements.

"Major Owen are a well-established and thoroughly trustworthy dealership," says Dave Goodridge. "They go to tremendous lengths to ensure great customer service, and you can tell it's a good company because staff turnover is very low."