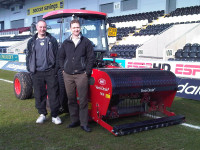 Scottish Premier League club St Mirren is a recent convert to the Verti-Drain, but Head Groundsman Tommy Docherty has found Charterhouse Turf Machinery's renowned decompactor to be a useful and versatile addition to the pitch maintenance armoury.

Tommy has an extra incentive to get his pitches spot-on - his personal love for the Renfrewshire club. He explains: "I started at St Mirren direct from school about 25 years ago, through a government scheme that placed me at the club as a general, all round assistant. It was the perfect job for me as I was already a big fan of St Mirren anyway!"

He is now Head Groundsman with one Assistant Groundsman working under him. "We both look after the ground at Greenhill Road in Paisley, and the training ground in Ralston, on the outskirts of Glasgow."

St Mirren purchased the Verti Drain when moving to a new ground at Greenhill Road in 2008, as Tommy explains: "This ground has a fibre sand pitch rather than the traditional soil pitch at our old ground. I decided that we needed a new aeration machine as part of the remit. I already had a Sisis slotter/spiker that was getting on for about 20 years and was ready to be replaced."

In the summer of 2008 he started to look around and tested some different machines, eventually purchasing the Verti- Drain 7416 from Hamilton Brothers in Bishopton, Paisley.

This second generation machine has a working width of 1.6m to make short work of full sized pitches, while being of a lighter construction to allow use with tractors from 45hp. Capable of working up to 35cm (14in) deep, tine angle can be adjusted to 25deg to fine tune the amount of heave that is achieved.

"A lot of the contractors we were using at the time had Charterhouse Verti-Drains, and all had good things to say about them, it's a very popular machine," he says. "I always thought what an excellent finished job the contractors did with the Verti-Drain whenever we required them to come in to do some work."

Tommy comments that he has found the Verti-Drain to be quick, doing a really good job in a short amount of time.

"You can also use a wide selection of tines - I tend to use inch, half inch and smaller 'micro tines' depending on the conditions," He adds. "It is easy to use, the build quality is solid and it's a very well put together machine - they have a reputation for this."

He is a firm believer in using the Verti-Drain at the right time and in the optimum conditions to get the best possible results. "If there is too much heavy frost or if it is too wet I won't aerate. If it is waterlogged then you end up causing all sorts of problems including leaving tyre tracks which just isn't acceptable, especially on the ground at Greenhill Road. You really need to look for a firm, stable and damp ground to get out and aerate. If I am aerating prior to a game then I will use the micro tines. If I am using the Verti-Drain to relieve heavy compaction then I go for the bigger, one inch tines and use a bit of 'heave' as well."

Tommy reserves his final words to praise the support that he has had from Charterhouse and The Hamilton Brothers: "Richard Heywood is my contact at Charterhouse and he's been great. I had him come and visit me recently as I had some questions to ask him about adaptors for tines. If I ever need Richard, he will come in and see me. The back up and technical support has been great."