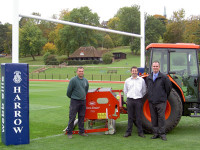 A newly purchased Verti-Drain deep aerator from Charterhouse Turf Machinery is ensuring that the extensive sports pitches at the famous Harrow School are maintained to the highest standard.

Harrow's sports turf spans some 150 acres. It comprises more than 20 soccer and rugby pitches, a nine-hole golf course, and cricket pitches. The school invests significant resources on its facilities, but every penny has to be spent wisely.

Grounds Manager Andy Matthews has 20 years' turf management experience and says that the nature of the local soil makes maintenance particularly challenging. "We have heavy London clay here and so regular deep aeration and decompaction is essential to maintain turf vigour," says Andy, who has also worked at the prestigious Taunton School.

Harrow's equipment fleet had included a Verti-Drain for many years. It was used continually, and Andy recently decided that a replacement was necessary.

"I had heard of several new competitors to the Verti-Drain, so I examined the whole market carefully. However, I soon realised that the Verti-Drain range had been developed and enhanced, and I eventually opted for a 2.1m wide 7521 model. Its principle of operation is tried and tested, and the machines sit on the ground better. They are also more robust than others."

The 7521 is from the Verti-Drain 75 series of heavy-duty aerators that can provide penetration of severely compacted ground to depths of 40mm (16in) with maximum productivity. Like other Verti-drains, the 7521's tine assembly has a unique parallelogram design, which creates a 'heave' effect as the tines leave the ground. This shatters compaction and lets air into the rootzone, stimulating healthy growth and improving drainage.

"We took delivery of the 7521 in September from local dealer Geo. Browns of Leighton Buzzard and it has performed excellently," says Andy Matthews. "We aerate 2-3 times a week on all the sports turf areas, using 12in (30cm) tines in winter and needle tines in the summer, to gain maximum benefit from the rainfall we get.

"The Verti-Drain 7521 does everything we expected of it. It is easy to set up, simple to use and I can't speak highly enough of it."

The machine will keep the pitches in peak condition and ready to withstand heavy usage - which, in Harrow School's case is unusually intensive, owing to its unique sport of Harrow Football. This can be loosely described as a hybrid of football and rugby.

The game is played with a non-spherical leather ball, resembling two 80cm diameter (31.5in) dinner plates connected by a 30cm (12in) strip. Tackling is permitted via any means, provided the tackling player's shoulder is in contact with his opponent. The game takes its toll on the turf, and on the players as well: the leather ball is heavy when wet and muddy, and boys trying to head it have actually been known to knock themselves out.