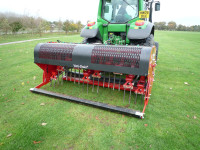 A Verti-Drain 7626 is proving its mettle on the Isle of Wight, where Andrew Earley, Contracts Inspector for the Parks and Countryside Division at Isle of Wight Council is using Charterhouse Turf Machinery's most powerful decompactor to tackle some extreme conditions.

A native of the island, Andrew has been working for the Council since leaving school, apart from a short spell as a Contractor when the grounds maintenance operation was privatised.

With an extensive brief that covers turf surfaces from sports pitches to parks and ornamental areas, Andrew runs an ongoing programme to tackle compaction and drainage problems.

He explains that the main reason for choosing the Verti-Drain was to treat compaction from the Isle of Wight Festival that takes place on the island in June each year.

"The Festival is held on Seaclose Park in Newport and attracts around 65,000 people a year. This park is very large and has eight full size football pitches on it, making it the ideal venue for the Festival," he says. 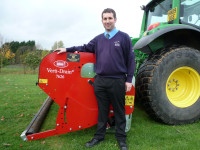 "But over the three day festival, the pitches get seriously compacted. Last year, I decided that we needed to invest in something that could handle the intense workload after the event better than the smaller Verti-Drain we already had. I needed to get a machine that could cover a larger area in a smaller amount of time, so we did some internet research and came across the Charterhouse Verti-Drain 7626."

Andrew explains that he could not find anything else on the market with the same spec as the Verti-Drain 7626. At 2.6m working width, the 7626 is the heaviest and toughest Verti-Drain on the market, designed for the most demanding of soil conditions and situations where high productivity is needed. It weighs considerably more than the 75-series, and it has a heavier gearbox, PTO and rear roller support.

Tine-depth adjustments are made comfortably from the tractor seat via the hydraulic controls, while the original amount of 'heave' on the tine is retained. Forward speed is faster than that of the 75-series.

"When we visited the Saltex show in Windsor last year, I already had in mind that I wanted to purchase a 7626 and went straight over to the Charterhouse stand. I had a chat with Charterhouse's Nick Darking and we arranged a demo at the Arsenal training ground where they have a 7626."

The machine was then sourced from New Forest Machinery (Isle of Wight).

Andrew explains that having used his previous Verti-Drain since 2002, he was well acquainted with its abilities, and has worked out the ideal programme for the conditions he faces.

"Before we had a Verti Drain, we just used to spike and slit." he says. "Because we have a lot of clay based soil on the island, we have a problem with standing water, especially in the winter months. I won't Verti-Drain if the conditions are too wet, but equally I won't Verti-Drain if it is too dry, for example in the middle of summer when the ground is baked. I think as a general rule, the perfect time to Verti-Drain is early spring and again in early autumn."

Following this regime, the Verti-Drain has proved the ideal solution to improve the pitches. "After the Festival in June, we have decided to start using two different sets of tines to relieve the compaction before the football season starts again in September. We start off using smaller tines, ¾in, this allows us to break the surface pan up without causing the damage that might be caused if we went straight in with larger tines. After using the ¾in tines, we then fit a set of 25mm tines and have a second pass to go down deeper," he explains.

"We have started doing more intense Verti-Draining on the Festival site in April in preparation for the festival in June. I think it is important to plan in advance to tackle the problems that the Festival causes."

Andrew has been pleased with the new machine and the service he has received from Charterhouse. "The build quality is really solid, it's a heavy machine!"

"A couple of minor teething issues that we had were sorted out extremely quickly. Charterhouse sent a technician out to me as soon as I called them and he rectified the problem immediately. The after sales service has been excellent, I can't fault it!"