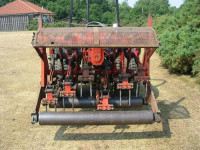 After an exhaustive nationwide search, Woodbridge Golf Club in Suffolk has scooped a major prize for owning the oldest Verti-Drain deep aerator still in daily use in the UK.

The contest was launched nearly 12 months ago by UK distributors Charterhouse Turf Machinery to commemorate the 25th Anniversary of the Verti-Drain's launch in this country back in 1981.

Steve Peters, Course Manager at Woodbridge Golf Club, learned of his success at a special luncheon at the Harrogate Brasserie, held during the BTME 2007 turf equipment exhibition. The Club's 105145 model Verti-Drain, still in regular use, was found to be the oldest at an astonishing 23 years of age.

Entrants had to provide photographic evidence showing their Verti-Drain was in full working condition, as well as the original serial number that enabled the machine's history to be confirmed. 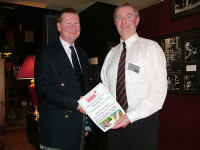 Woodbridge Golf Club's prize is a brand new 7316 model Verti-Drain, one of the very latest versions with a 63in (1.6m) working width and the ability to aerate down to 12in (30cm). This high work-rate machine can treat areas of turf of up to 38,000 sq ft (4200 sq m) per hour. The 7316's gearbox cleverly enables operating speeds to be matched exactly to achieve the desired hole spacings. There are also no grease points on the machine, removing any risk of turf contamination.

"We have been thrilled by the overwhelming response to our Silver Jubilee contest," enthused Philip Threadgold, Managing Director of Charterhouse Turf Machinery. "We attracted a huge number of entries from sports clubs and contractors from all over the UK. The fact that they all have original Verti-Drains, and still use them regularly, proves how essential the units are for good turf maintenance, as well as their rugged build quality. The phenomenal interest also shows how highly owners value and care for their machines."

Also present at the award ceremony was Cees de Bree, President of Dutch-based Redexim Charterhouse, the parent company of Charterhouse Turf Machinery, in recognition of the Silver Jubilee success. "We have always designed Verti-drains for long-lasting performance, and there can be no better proof of this than the sheer number of original machines that were entered for the competition," he said.

Many turf industry commentators cite the Verti-Drain's introduction as the single most significant advance in turf maintenance machinery history, since it provides a quick and effective means of keeping playing surfaces in better condition.