0 Verti-Drain The Only Choice For Blackburn 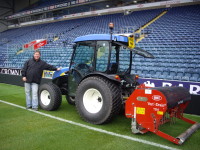 For Head Groundsman at Blackburn Rovers, Steve Patrick, there was only one course of action when his Charterhouse Verti-Drain 7316 needed replacing after 14 years of hard work - to replace it with another Verti-Drain!

Steve has been at Blackburn for 24 years after working initially for the Local Authority. He recalls how he first came across the Verti-Drain.

"I was first introduced to the machine through a good friend and sports turf contactor, John Mallinson, who was one of the first people in the UK to buy a Verti-Drain when they first came over from Holland 30 years ago. I remember when it first came to the UK, it was a massive innovation for turfcare," he explains.

"Before that, we used to get the apprentice players to spend weeks sticking hand forks in the ground at the end of the season!"

Over the years he has become a firm fan of the Verti-Drain, and comments that he didn't have to shop around when looking for a new aerator.

Steve predominantly uses the 7316, which has a 1.6m working width for high outputs, on the main ground at Ewood Park, although it is also deployed at the Academy and the Senior Training Centre , getting as he says, 'a lot of use'. The pitch at Ewood Park is aerated four to six times during the season, improving drainage and allowing water, air and nutrients to reach the turf roots.

He says that best results are gained by using the Verti-Drain as part of a carefully-planned programme.

"The conditions have got to be just right," he insists. "It has to be dry enough but not too dry, wet enough but not too wet. It's all about timing with the weather and if you've got your own machinery as opposed to using contractors, you can pick and choose the ideal conditions to operate in. A long time ago, before we had our own Verti-Drain, we used to hire contractors, and they would come and aerate whatever the conditions which was not good at all."

Steve's challenge is increased by under pitch heating pipes sitting under the surface at Ewood Park, which sit well above the 7316's 30cm (12in) maximum working depth.

"Because of this, we adjust how much heave we want and control the depth which we are punching down to. At Ewood Park, we can't go any deeper than 6 or 7 inches - if you go below that you run the risk of striking one of the pipes like the Beverly Hillbillies striking oil!"

He comments that he finds the Verti-Drain easy to use, operator-friendly and simple to mount onto and demount from the three-point linkage on the tractor.

"The tines are well made and the unit is well priced in general. Everything about the machine is easy to use really. It's rugged, sturdy and in my opinion, Charterhouse make the best equipment on the market today."

And Steve says that support from manufacturers and dealer match up to the machine's quality. "The back-up from Charterhouse has been absolutely first class."