With the Verti-Drain deep aerator celebrating its 25th successful year in the UK, many users of the revolutionary machine have been pausing to reflect on how vital it has been in maintaining high-quality turf, and on the fact that it remains an essential component in their grounds management operations. Distributed in the UK by Charterhouse Turf Machinery, models are used at many types of facility and at all levels.

As part of the celebrations commemorating the Verti-Drain's UK Silver Jubilee, Charterhouse Turf Machinery have held a competition to find the oldest machine that is still in regular operation. "We have had a phenomenal response," says Managing Director Philip Threadgold. "It has made users look closely and appreciate their machines, and it emphasises the Verti-Drain's build quality."

One of the many entrants is Douglas Park Golf Club in Bearsden, Glasgow. Course Manager Drew McKechnie enthuses about his Verti-Drain 105145. "This machine just has to be one of the most important tools available to the greenkeeper. It has been well used on all areas of our course, and especially for hollow coring of greens."

Another golf course hoping to carry off the prize of a brand new Verti-Drain is the Bedfordshire Golf Club located near Bedford. Course Manager John Gubb says that his 005120 model is used for aerating greens, tees and approaches. "It is great for deep tine aeration. You can vary the depth and let lots of air in to the soil, which is very useful as the approaches are built on clay. We can penetrate down to 10-12in (25-30cm) on the greens, and if you use a mower immediately afterwards you don't even realise that the Verti-Drain has been there first."

Graham Waller, Course Manager at Henley Golf and Country Club in Henley-in-Arden, Warwickshire, says that his Verti-Drain 105145 has proved "an invaluable piece of kit for us. We have used it extensively on all areas of the course, and in winter it is operated flat-out."

The Verti-Drain is indispensable for Phil Redgwick, Head Groundsman at the Galpharm Stadium in Huddersfield. The facility acts as home for both Huddersfield Town FC and for the Huddersfield Giants Rugby League Club, meaning that the playing surface comes under constant pressure. "We just don't get a break," jokes Phil. "We use our Verti-Drain 105145 as as possible in order to relieve compaction. The machine penetrates to a good depth, which aids root development and drainage and helps to maintain a good playing surface. It works absolutely perfectly."

Another facility where rugby takes place regularly, namely Kingsbridge Rugby Club in Devon, has also entered the 25th Anniversary Competition. "We are 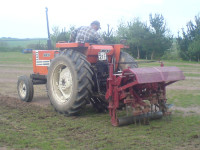 only a small junior club and I head up a team of four volunteers," says Groundsman Kevin Harvey. "Our Verti-Drain 105145 is essential for relieving compaction and aerating our three pitches. It was used regularly recently for hollow coring prior to brushing sand over the surface, as part of major drainage improvement works."

Philip Threadgold says that the winner of the contest to find the oldest Verti-Drain in use will be announced soon. "However, every user of a Verti-Drain is a genuine winner because of the incredible benefits that it brings in terms of performance and efficiency. The machines have proved so popular that turf professionals talk of using the Verti-Drain rather than just 'deep aerating' and it has become part of the language. Similarly, the Verti-Drain is a vital feature in many equipment sheds throughout the country."