0 Verti-Top Pulled Behind Chosen to Look After New Investment 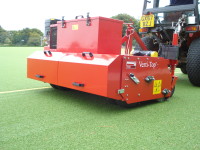 Eastbourne College has two full size synthetic pitches that are primarily used for hockey matches. The first sand filled pitch was installed there in 1995 by Bernhard's Sports Surfaces, and has seen intensive use year on year ever since.

Richard Maryan, who has been at the College since 1994, has learnt a thing or two by seeing the full life cycle of his first carpet from installation to removal. "When we had the first surface installed in 1995, it was a bit of a learning curve for us. Initially, all we used to do was brush the surface to remove leaves and debris. The health and safety aspects that are implemented into synthetic surface maintenance these days weren't common place back then," reflected Richard.

Simon Hall of Bernhard's Sports Surfaces commented, "When Richard came to us to discuss having a new carpet laid, we recommended a sand dressed carpet made by EDEL Grass of Holland, who have developed the carpet in conjunction with a top Dutch hockey player, making it ideal for the requirements at Eastbourne."

Once the old carpet was replaced, Richard decided that he needed to invest in some equipment that would not only keep his new surface clean and match ready, but prolong it's lifespan as well. He knew through completing the I.O.G Synthetic Surface Maintenance course that there was only one choice when it came to purchasing the right piece of kit for the job. 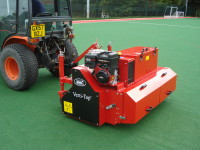 "I already had a Charterhouse Verti-Drain 7316, topdresser and a seeder for my natural turf that were all superbly built. I had seen in the press and at the trade shows that they had a renowned range of synthetic maintenance equipment as well," commented Richard. "I contacted Charterhouse and they sent Product Manager, Curtis Allen, to come and see me."

Curtis suggested that Richard gave the Verti-Top a try, as the machine uses a large rotary brush to sweep the surface and collect material from within the carpet. The collected material, that can include anything from skin and hair to dust and leaves, is then placed onto an oscillating sieve to separate the waste material from the infill. The infill is then returned and brushed back into the surface.

"I knew the surface that had been installed by Bernhards Landscapes was a lightweight, sand dressed pitch, as opposed to a heavy rubber crumb pitch with a longer pile," reflected Curtis. "I knew that the Verti-Top was perfect for the pitch. However, I suggested that Richard considered the model with two rear wheels and two pivoting front end wheels instead of the standard single roller."

Originally only available in the US but now available in the UK and Europe due to high demand, the Verti-Top Pulled Behind has its own engine built in, meaning that it can be pulled by an ATV, utility vehicle or compact tractor.

The adjustable height of the rotary brush is also proving to be a very effective feature, Richard explained, "Sometimes, I like to lower the brush as deep into the carpet as I can to deep clean it and get all of the muck out. At this time of year though, with all the leaves falling onto the surface and moisture on the ground, I like to keep the brush at a higher level so that I am only picking up the surface debris and not disturbing the sand".