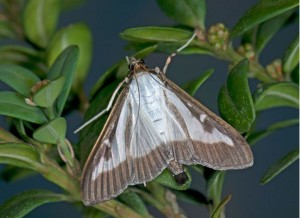 Not since Alexander Pope ended the 18th-century craze for artfully-trimmed hedges by lampooning aristocrats for turning shrubs into "awkward figures of men" has British topiary faced such a grave threat.

Gardeners are being warned to look out for a new invasive pest which is threatening to lay waste to Britain's box trees - the favoured shrub of topiary artists - by stripping entire plants bare and reducing painstakingly-clipped creations to withered skeletons.

The Royal Horticultural Society (RHS) has recorded a rapid expansion of cases of Diaphania perspectalis, otherwise known as the box tree caterpillar, a species native to Asia which likes nothing better than to snack on the hitherto famously hardy Buxus sempervirens, which is toxic to other animals, including humans.

The caterpillar, which becomes a moth with semi-transparent white wings, is thought to have first arrived in Europe in 2005 in a consignment of box plants sent from China to Germany. It was reported in Britain five years ago after larvae were spotted in a Surrey nursery and there have been sporadic infestations since.

But now experts fear it may be on the verge of expanding rapidly across the country after the number of cases doubled in the last 12 months and infected plants were spotted in east London and Buckinghamshire.

The RHS documented eight cases of infestation by the voracious caterpillar in a single month in May in the Woodford and Loughton areas of London and the village of Stoke Poges, near Slough. The figures are double the total for the entirety of 2013 and match the number of all sightings since 2011.

Andrew Salisbury, an entomologist with the RHS, told The Independent: "The numbers don't sound high but they are a marked increase and a sign of establishment of the species.

"There were eight cases over the last three years, and now there are already eight this year, indicating that this pest is now well-established in parts of the South East and likely to become a big problem on box plants."