The pace of golf greens has never been more central to how the golfer views the quality a given golf course. Speed is now demanded instead of craved and the virtue of patience is now a distant memory of day's gone bye. Augusta syndrome is no longer confined to a couple of weeks in April but is instead culpable for the entire year. Yes, speed is King and "long live the King".

So how do we satisfy this thirst for velocity? Lets first look at what determines the speed of a green… 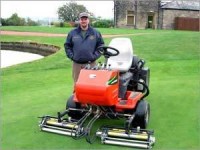 According to classical mechanics, ball-roll distance relates to the ball's initial energy when a putter strikes it (or when you release it from a Stimpmeter) and friction-the resistance between the ball and the turf surface. As the ball rolls across the turf surface, the resistance of the putting surface slows it down. A green with high resistance decreases ball speed more quickly than a green with low resistance and results in a shorter ball roll (a slower green). Thus, any management practice that modifies resistance will subsequently change green speed (Dr. Roch E. Gaussoin 1999).

There are many ways to decrease the resistance between the green surface and the ball and thus increase green speed. Some examples are: Decrease Nitrogen levels which will help fine down the grass leaf, promote a more upright growth by regular verti-cutting, use of PGR's to thicken the turf canopy, top-dress greens regularly to "fill-in" any small voids in the turf and of course reduce the cutting height. Perhaps the simplest and historically the most used method is to use rollers to smooth the green.

Rolling to increase green speed can be accomplished in a couple of ways: 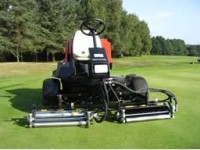 The basic roller consist of a drum of a given weight, which may vary in diameter, that is rolled across the green to even out small deviations in the surface of the green. The weight of the roller will determine the extent to which these deviations are compressed.

An evolution of the basic roller system is to use several rollers in train so that for a single pass over the green the surface may be rolled in multiples determined by the amount of rollers in use. Examples of this type of roller are the Greens Iron and the Tru-Turf machines. These are self contained units with an engine and transmission. They require specific operator training as they are fairly awkward to manoeuvre. The advantage of a system with multiple rollers is that less passes over the green will be required to increase green speeds. However, when basic heavy rollers are incorporated to work within a greens triplex mower, there is some concern over the strain they cause to the lifting hydraulics which are designed to lift approx. half the weight of systems such as the Tru-Turf rollers. Because of their weight they are also cumbersome to install and remove. Further concerns have been voiced about legislation concerning manual handling.

Perhaps the single biggest disadvantage regarding the basic roller configurations is their inability to "vibrate" top-dressing into the turf canopy. Vibration of sand into the turf is a recent trend which helps prevent blades being blunted when cutting through the sand by substituting rolling instead of cutting in the couple of days after top-dressing - a very useful compliment to normal rolling. Rolling greens whilst incorporating vibration has recently gained acceptance amongst the greenkeeping fraternity. The dual advantage of increasing green speeds whilst aiding the incorporation of top-dressing into the turf canopy is seen as better value for money than a basic roller alone. Another reason for the upsurge in usage of vibratory rollers is that their weight is similar to that of a regular greens triplex cutting unit and therefore does not strain the hydraulic lifting mechanism on the
power unit. Operator training is also not necessary which implies the scope of personnel able to perform this task is equivalent to those that can cut the greens; there bye making it easier to integrate into routine course maintenance.

One concern of a single drum vibratory roller is the risk that corrugation of the green surface may occur if the frequency of vibration is too slow in relation to the speed of the mower moving across the turf. The average operating speed of a greens mower is approx. 3 - 4mph. A vibrating roller operating at a frequency of 83 Hz would equate to an alternating shift in weight of the rotating shaft at about every 15 - 20 linear mm of travel - this could lead to corrugation problems depending on the firmness and amount of thatch present in the green. One way to overcome this is to reduce the mower speed to reduce the vibration interval and so reduce the linear distance of force - but this is not maintenance friendly due to
time constraints placed on course managers these days.

A new initiative from TurfWorks International™ is the True Level Vibratory Roller™ system which transfers its high frequency vibration rate through two rollers instead of only one. This is the most revolutionary (excuse the pun!) approach to the use of rollers to help maintain golf greens in recent years. The designers of this system have cleverly incorporated the vibration mechanism in a cassette that transfers its vibration through the systems chassis. The vibration is transmitted equally through the rear and front rollers which are both 60mm in diameter. This system consistently beats the competition at increasing green speeds because of the dual effect of the high frequency coupled with the twin rollers. It is also effective in working in top-dressing into the turf and even has a brush system that can be attached to the vibratory unit which is very efficient when the sand is slightly damp.

Possibly one of the biggest selling features of this system is that it takes the cost saving aspect of vibratory rollers a stage further by negating the need to purchase a separate cassette maintenance system. The user simply removes the vibration cassette and swaps it for a verticutter or sarrel roller etc.

The TurfWorks™ System is now available for the discerning Course Manager who realizes the benefits of the industries only modular greens maintenance system that incorporates vibration rolling as part of its extensive maintenance repertoire. For a modular system that includes a verticutter, Poa destroyer, Rotary Brush, scarifier and the patent pending Vibratory cassette plus many more then contact TurfWorks International™