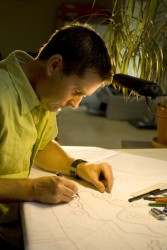 "Although we're still in the depths of global recession, and it seems that there's a long way to go, I'll continue to positively encourage those people who contact me"

With the current depressed state of the golf industry, it's still a bit surprising to be receiving so many emails requesting me for a job in it. Because we're not recruiting I reply with a negative response, but I'm always as encouraging as I can be, because you never know when you'll bump into these people again.

Since 1987 (when I left Leeds Polytechnic with a Diploma in Landscape Architecture), I've been very fortunate to remain employed consistently in the golf industry. On my 'journey' I've met and worked with some really positive and inspiring people. Some have been more inspiring than others.

Whilst at Poly', I managed to 'engineer' a 'study week', to travel around the UK with a fellow student, visiting golf courses and horticultural colleges and meeting golf contractors, architects and agronomists. The week was organised as part of my final design project, which was to redesign my local course into a golf, leisure and country club - pretty unlikely in the bleak hinterlands of Leeds/Bradford. However, I had big ideas back then. So, it was, in effect, a research trip or, I suppose, reconnaissance. It proved to be very useful - I got offered a job working as a labourer for Brian Pierson Contractors, at 'The Home of Golf' - working on the reconstruction of the Jubilee Course at St Andrews, where Donald Steel was architect. Pretty good start.

As a journeyman golf course architect, who's never worked for a major golf course architecture practice, I've learned from the grassroots up and I've taken opportunities wherever they have presented themselves. I always try to encourage the people who have worked for me to do the same, plus those I've mentored through the European Institute of Golf Course Architects. The golf industry is small, but pretty varied, so there are lots of tangents you can follow in order to fulfil your dream. Plus, there are opportunities in related fields and other areas of turf culture, such as football, tennis, schools, cricket, Local Authorities and contracting.

Today, though, in 2011, it seems that the opportunities are few and far between. The press and trade journals talk about the booms in China, India and Latin America but, even in these regions, projects can take a long time to happen. Worldwide, the boom has slowed and it's difficult to foresee it speeding up again.

Compare this with the UK boom in the late 1980s, soon after the R&A had published their document, The Future of Golf. They (the R&A) had stated that hundreds of new golf courses were required in the UK before the end of the 20th Century in order to satisfy demand. So, every farmer who saw an opportunity to make a quick buck, no matter where he was, put in an application for change of use to convert his farm into a golf course - land values went up accordingly. Europe winning the Ryder Cup in 1987, and the worldwide success of European professionals, further boosted the boom.

The development of golf courses in the UK, from then through to the mid-90s, went into overdrive, with new ones springing up like mushrooms. The design and quality of some of these new golf courses, let's say, was questionable.

The boom soon spread to continental Europe - central, eastern and the Mediterranean - Spain and Portugal, in particular. Then, the Middle East and Africa.
I could go on and on about where the growth will go next, or whether it will end. But, there is a glimmer of hope - and that might be in the Olympics. The decision in 2010 to make golf an Olympic sport was inspired and could well be the future of the sport. Okay, it won't be as thrilling to watch as, say, the 100 metres, the rowing or women's beach volleyball (!), but it's going to publicise the sport worldwide. The first time it will be competed for will be at the Brazil Olympics 2016, and the golf course is being planned now, although an architect has not yet been chosen. A host of architects and designers have offered to do the work, including Robert Trent Jones Jr., Jack Nicklaus, Arnold Palmer, Gary Player, Nick Faldo, Seve Ballesteros, Greg Norman and others.

What the Olympics could do for golf is make it more accessible. The age-old argument that golf is elitist is true in most parts of the world. Private members golf clubs predominate in Europe and the USA. These will always remain, but they will probably have to change in order to survive. Golf club memberships are dwindling and the golfer is now more likely to play pay and play golf on a number of golf courses throughout the year, rather than play his own course, week in week out. This makes the market vulnerable, but it also offers opportunities for operators.

Some of the more forward thinking clubs are offering more flexible memberships, whilst still offering all the benefits of full membership - a reduced annual subscription, combined with pay and play - which offers the more casual golfer better value for money.

So, the future may not be that gloomy - the desire for sportsmen and women to compete in the Olympics may just encourage them to play golf. Golf training and coaching may even be supported by Government grants (although it's cynical of me to say that it's unlikely to be the case in the UK). Countries where golf is not yet even recognised may do this - and some of these are in Central Europe.

Good job I ignored him, and did exactly as I wanted to do in the first place.