Some eBay finds are just pure gold. In this case, a vintage circa. 1971, unused and undoubtably collectable Toro 21" Greensmaster pedestrian mower, which cuts like a dream. 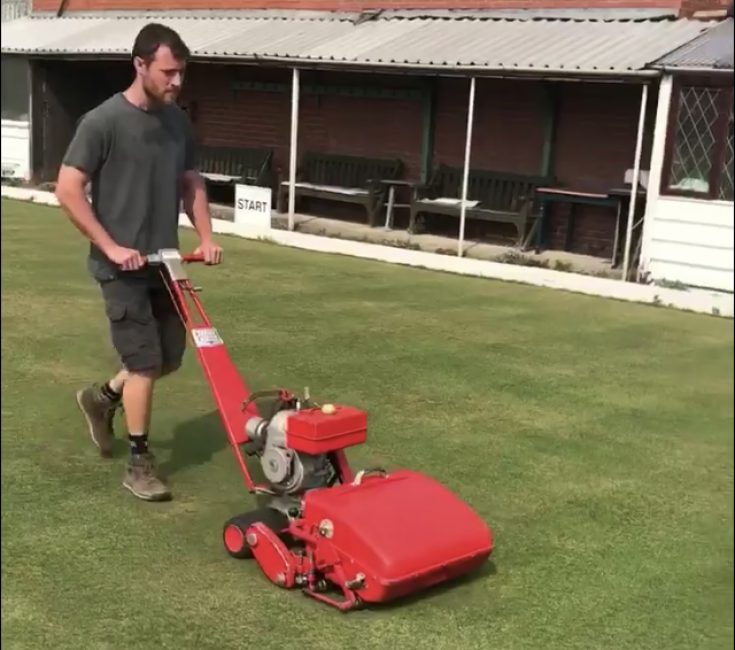 Dan Ashelby giving the Toro Greensmaster, which is thought to have been manufactured in 1971, a one-off outing on a bowling green

The listing was won by Toro's Student Greenkeeper of the Year Award 2018 winner Dan Ashelby's dad, Mark from Mark Ashelby Grounds who has spent 25 years in sports turf management and knows a good deal when he sees one.

One of the precursors to the hugely successful and enduring Toro Greensmaster 1000 greens mowers range, Dan says of his Dad's win: "We couldn't believe it when we saw the listing. The machine was bought new by a cricket club in the early 1970s but never used. It's in mint condition with no wear anywhere. It came with the original user manual and the original stickers on the engine. The red paint is still freshly painted like new on the cutting reels!

"It was bought as a collectible and is too good to use, but we couldn't resist setting it up and giving it a quick one-off outing on a bowling green. And she cut like a dream."

Greenkeeping is in the Ashelbys' blood with Dan's greenkeeping education beginning at a young age. His father was head greenkeeper at Gatley Golf Club and Dan has been helping out around the course since he was eight years old. Since winning the Toro Student Greenkeeper of the Year Award in 2018 and benefitting from a once-in-a-lifetime six-week worldclass certificate programme at the University of Massachusetts Winter School for Turf Managers prize, Dan has achieved head greenkeeper position at Hartford Golf Club in Cheshire.

He says: "Greenkeeping is definitely a shared interest Dad and I have. Things like this recent eBay find are good fun and it's great to bring a bit of its history into the family. I'm a big Toro fan and love using the new machines at work, so it's been great to have the opportunity to see and use one of the very first Toro machines to arrive in the UK, which was well before I eventually did!"

So, what's next for this rare vintage find? Dan says: "The rest of its life will be much like that of a classic car, enjoying the occasional run out on a nice sunny day!"