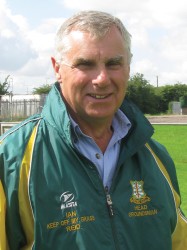 The Vipers are a 'normal' small rugby union club where attention to detail and boosting nature, along with the biological management approach, is providing a cost effective, high quality first class pitch.

Now being described by the Leicestershire RFU President as being "possibly the best playing surface in the county", great appreciation is being heaped on lone groundsman Ian Reid for the hard work and results he has achieved with the pitch. Praise enough for him to be nominated by the club for the Volunteer Groundsman of the Year Award.

Ian has been a member of the club since he left school in 1966, firstly as a player, then a committee member, Vice President, Fixtures Secretary and, finally, a volunteer groundsman.

In 1994 the members decided they wanted someone to sort the pitches out, he volunteered and said he would do it for a year! Fifteen years on he still works relentlessly at the club and is just as passionate about producing a first class pitch as he was at the beginning.

"Back then, good contractors were hard to come by, and I could never get them exactly when conditions demanded and, to be honest, our budget was very limited - still is if I'm honest! Which is why I offered to step in. The first thing I did was to persuade the committee to invest in some equipment - a 1966 Massey 135 tractor and an old Ransomes 340 gang mower - so I could, at least, introduce a proper mowing regime" explained Ian.

"The club had let their pitches fall into disrepair and, like many clubs, little was known about the requirements of sportsturf until I started working. I needed to expand my knowledge more, so I attended a Winter Pitch course at Loughborough University, which was invaluable." 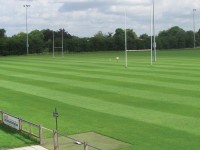 "We had all the usual problems and more; compaction, weed infestation, lack of nutrients etc., and not a very big budget to put it right. However, as the pitches improved, the committee became more enthusiastic and found funds to support my requests for better equipment."

Ian had been putting traditional granular NPK fertilisers down - although he was not in a position to keep piling on loads of the stuff because of budgetary restraints. "I had my concerns though as, for years, I had only applied synthetic inorganic fertilisers and achieved reasonable results, but this was not producing good root development."

"I became increasingly interested in the organic methods I had been reading about, so I contacted one of the companies, Soil Harmony, and asked their Mark Atkins to pay a visit. He explained the way microbes in the soil provided food for the plants and that, along with good aeration practices, his product would work better than piling on lots of traditional fertilisers." 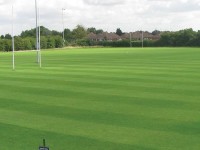 "They carried out a comprehensive diagnosis of the soils, under their Free Heath Check analysis scheme, and produced a maintenance application programme specifically for the conditions here at the Blaby grounds."

"The Soil Harmony programme, being natural and biological, as opposed to using chemicals, was, therefore, somewhat new to me. But, I liked the natural approach and Mark's theories, combined with the products, impressed me."

"My doubts were soon forgotten as the first application in late winter had an immediate and positive effect on the grass plant that was then maintained throughout the season." explained Ian.

The analysis quantifies the various nutrient elements present (exchangeable, total and soluble) and their inter-relationship with each other. It then uses this information, along with other criteria, to devise a tailor made programme of the essential microbial nutriment feeds that need to be applied. Visual observations are then employed to monitor grass health, root development and wear & tear application. 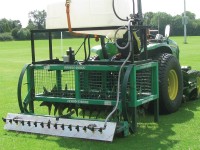 Ian modified his tractor mounted Greensward slitter by fitting a spray boom and 400 litre tank. This means he can slit, roll, rake, brush and spray in one operation saving an awful amount of very precious time.

He uses two parts Bios Turf Tonic and a little bit of Trace-Moly to bring the molybdenum levels up - as this is an important part of the process in converting atmospheric nitrogen into plant food. He also adds in High-N (nitrogen) to suit the turf requirements, and N-Fusion (two applications only), for airborne nitrogen fixation - all in the one tank - which means he can spray nutrients and aerate all in one pass.

The treatments are effective, affordable, have a low impact on the environment and have been proven in laboratory trials to increase microbial activity in the rootzone, with increases of 71% in bacterial abundance and 83% in Mycorrhizal colonisation being recorded.

Regular analysis is undertaken and has become a very useful tool to record and monitor the status of the rootzone. The compilation of the data reveals what is happening below the surface. 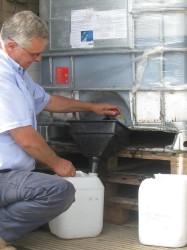 The latest results were once again very positive. Soil organic matter has stabilised, meaning it has become constant where debris from the growing plant is recycled returning nutrients back into the ecosystem, all helped by the activity of a microbial living soil. Not only has the quality of the turf improved, through more efficient nutrient control, but maintenance costs are also stabilised by not wasting money with regular applications of inorganic fertiliser.

"I haven't used any chemicals for two years since the health check," said Ian "and I now have the most sustainable pitch we've have ever had, which results in very quick recovery, which is really important in rugby."

"My training pitch only had 50% coverage at the end of the 2008/2009 season. I overseeded that pitch in late April after vertidraining and topdressing. Within five weeks it had achieved 100% coverage. I have never seen recovery like that in fifteen years. It usually takes from April to September to achieve the same results using chemicals!"

Ian believes the recovery rates are rapid due to the deep rooting that has developed. This was first noticed when excavating holes for new posts, where grass roots were noted at below 250mm depth. Grass plants seem to be full of vigour and health.

Ian maintains that a lot of clubs simply don't understand the value of their pitches and that they are 'everything' to a club. "When they are in great condition revenue is up, because people want to use the pitches and clubhouse. Clubs need to learn to stop using their pitches like an old door mat, rendering them unusable which, inevitably, leads to expensive and major renovations that clubs just cannot afford at this level. Remember, no pitch equals no players, no revenue and then no club". 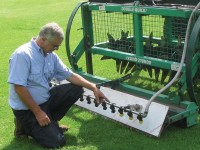 The ongoing benefits have been apparent, even when the pitches were trained and played on for in excess of seventeen hours a week from September to Bonfire Night last year. And then, like many clubs, used as a car park! The turf quality, with almost 100% coverage, was maintained throughout the season, with play continuing through to late May this year when the grounds were selected for use by Leicestershire RFU. "We now have such a high standard of pitch that they have played all their 2008/2009 games at The Vipers" said Ian proudly.

Ian has been so inspired with this new approach to grounds maintenance that he wants to spread the word. So much so that he has formed a very small company called MatchFit SportsTurf offering quality sportsturf maintenance for football, rugby, golf and cricket - with the Soil Harmony approach being integral. "From the experience I have gained from working at Vipers I understand that clubs don't have big budgets. My aim is to offer a value for money, tailor made package to any club wishing to improve its grounds and status.

Twenty Questions - Ian 'Keep off my grass' Reid - assisted by his son and Indie the dog ... all wearing slippers?

Who are you? Ian Reid, Head Groundsman, Leicester Vipers RFC.

Who's your hero and why? My son Rob. He helps me out at the ground. His marking out is superb and he's always there to pitch in when I'm struggling.

What is your dream holiday? Somewhere peaceful on a tropical beach with good food and a bar to chill in sounds good to me.

What annoys you the most? Incompetence, from those who should know better. 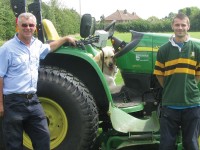 What would you change about yourself? I'm happy with myself, it's just the others.

Favourite record, and why? Red Red Wine, UB40. Reminds me of happy times

Who would you choose to spend a romantic evening with? My wife, Anni who always supports me in everything I do, or Amanda Holden.

If you won the lottery, what is the first thing you would do? Buy a new home in this country and maybe abroad.

If you were to describe yourself as a musical instrument, what would you be and why? A double bass. It's not the first thing you hear when you listen to an orchestra, but everyone knows it's there.

What's the best advice you have ever been given? Don't take anything for granted. When you do a piece of work, check it then check it again.

What do you do in your spare time? Groundsmanship takes up every spare hour I have! I used to make period furniture but each takes up so much time to achieve perfection.

What's the daftest work related question you have ever been asked? "Why can't we go out and train on the (waterlogged) pitch?"

What's your favourite piece of kit? My 'grounds assistant' dog, Indie, and tractor.

What three words would you use to describe yourself? I am creative, passionate and caring.

What talent would you like to have? I have lots of talents already, it is important to me to be able to pass these on to others and make the best of what I already have and whatever comes in the future.

What makes you angry? When players and coaches take grounds for granted, misuse them, and insist on wearing boots instead of slippers!

What law/legislation would you like to see introduced? I'd get the banks, pension companies and politicians to pay back every penny of the money they owe to me!